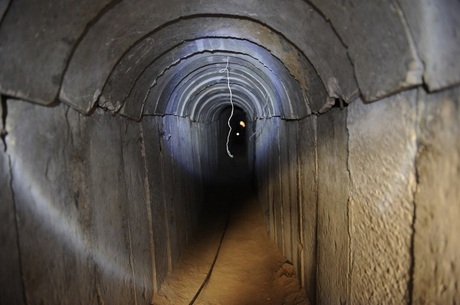 The Israeli army's ground offensive in Gaza is purportedly aimed at destroying a network of sophisticated cross-border tunnels, which Hamas and other militants have dug to infiltrate Israeli lines.

In 2006 Israel imposed a blockade on the impoverished coastal enclave after Gaza militants captured an Israeli soldier in a cross-border raid.

This pushed Hamas and other militants to dig tunnels under the border with Egypt to spirit into the densely populated Gaza Strip food, fuel, a variety of consumer goods as well as weapons.

In March, Egypt's military said it has destroyed 1,370 smuggling tunnels under its border with the Gaza Strip, months after it ousted Islamist president Mohammed Morsi who was a Hamas ally.

Israel is now after dozens of so-called "terror tunnels" in Gaza and the army says it has already found eight access points.

"Dozens of terror tunnels are spread throughout the Gaza Strip, the majority of them constructed and utilized by Hamas," an army spokesman said in a statement Friday.

On Thursday morning, 13 heavily-armed militants managed to infiltrate southern Israel before being spotted by troops, with one killed in an air strike and the rest fleeing back underground.

Haaretz newspaper reported Friday that five cross-border tunnels have been found in Israel over the past two years.

"A tour of some of the tunnels during the past year reveals that the digging is quite elaborate: The tunnels are connected to electricity and sometimes to a phone line too, and usually include a number of branches inside Israeli territory," said Haaretz.

The report said the tunnels are dug at various depths and that "Israeli intelligence believes the tunnels designed for attacks inside Israel are dug by special Hamas crews with expertise in this kind of job."

"Hamas is largely inspired by the techniques used by Hizbullah, notably its underground infrastructure, which gives it the capacity to hold out for weeks," political commentator Daniel Nisman told AFP.

In its statement the army said the "offensive tunnels are complex and advanced" and that they "are intended to carry out attacks such as abductions of Israeli citizens and soldiers."

In June 2006 fighters from Hamas and other militant groups tunneled into Israel and attacked a border post, snatching a 19-year-old corporal, Gilad Shalit.

His abduction transfixed Israel, which imposed a punitive blockade on Gaza. Shalit was freed five years later in return for the release of hundreds of prisoners jailed in Israel.

Thursday's foiled infiltration by Palestinian militants into Israel has hiked fears that tunnels will be used to attack Israel.

Haaretz reported that Israelis living near the Gaza border "sometimes hear the sound of drilling at night" associated with tunnel digging.

It quoted a resident saying that patrols are organized because people "are afraid that someone will suddenly emerge from some opening in the ground."

Prime Minister Benjamin Netanyahu in announcing the ground operation that was launched late Thursday said the aim was "to hit the terror tunnels crossing from Gaza into Israel's territory."

"It is not possible to deal with tunnels only from the air, so our soldiers are also doing that on the ground," said Netanyahu, admitting however that there was "no guarantee of 100 percent success."

"impoverished coastal enclave", but there is plenty of money for ten thousands of rockets, and cement for underground offensive infrastructure. Given Hamas priorities, the Gazans will remain impoverished for a long time!!!