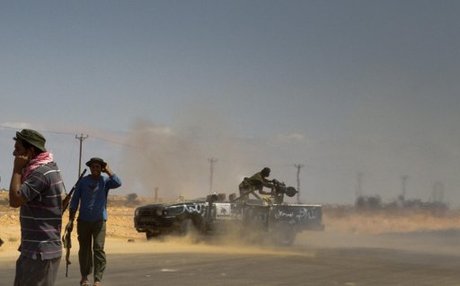 Libya's rebels said Wednesday Moammar Gadhafi is almost certainly in Libya and that they have a "right to kill" him, while giving the fugitive strongman's remaining troops until Saturday to surrender.

"The information I have is this: it is 80 percent certain that Gadhafi is still in Libya," Omar Hariri, head of military affairs, told Agence France Presse in Tripoli.

Hariri said rebels suspect Gadhafi is hiding either in Bani Walid, southeast of Tripoli, or in the outskirts of the capital. He stressed, however, that since Libya is in a state of war information changes rapidly.

"We think he is in Libya," Ahmed Darrad, who is charged with overseeing the interior ministry until a new government is elected, told AFP late Tuesday.

"It is our right to kill him," said Darrad.

"He is killing us. He is a criminal and an outlaw. All over the world if the criminal does not surrender, it is the right of law enforcers to kill him."

Catching Gadhafi is a primary goal for the rebels who claim to have overrun most areas of Libya although negotiations are still underway for the surrender of regime loyalists in Sirte, hometown of the strongman.

Gadhafi's wife, daughter and two sons fled to Algeria on Monday but the strongman himself and at least two other sons are widely believed still to be in Libya.

Mustafa Abdel Jalil, chief of the rebels' National Transitional Council (NTC), said in an interview published Wednesday by Egypt's state-owned Al-Ahram newspaper, that he wanted Gadhafi arrested alive so he could be put on trial.

"I believe he is in Libya, and I hope he is arrested alive so he can be brought before a fair trial for his crimes against the Libyan people," he said.

Abdel Jalil on Tuesday gave the loyalists until Saturday to surrender or face the "final battle" of a more than six-month uprising against Gadhafi's autocratic regime.

The rebel leader told reporters in their eastern stronghold of Benghazi the ultimatum was offered to mark the three-day Eid al-Fitr feast that follows the ending on Tuesday night in Libya of the Muslim fasting month of Ramadan.

Talks are under way with civic and tribal leaders in a number of towns, including Sirte, in an effort to avoid bloodshed, but more fighting could be imminent as rebel fighters massed to the east and west of the town.

"From Saturday, if no peaceful solution is in sight on the ground, we will resort to military force," Abdel Jalil said, warning that Gadhafi "is not finished yet."

NATO also said Gadhafi's influence remained potent despite him being on the run.

"He is displaying a capability to exercise some level of command and control," Colonel Roland Lavoie, military spokesman of the NATO air mission in Libya, told a news briefing via video link from his headquarters in Naples.

While rebels sought to talk Gadhafi troops into surrendering in Sirte, their last major stronghold, NATO air strikes were now focused on the corridor between Bani Walid and Sirte.

In its latest operational update issued on Wednesday, NATO said its warplanes had hit a command and control facility, three tanks, 12 armed vehicles, as well as a military facility, command post and radar at Sirte.

It said it also destroyed a munitions dump and a number of military facilities and weapons at Bani Walid.

"We have been given no indication of a peaceful surrender... We continue to seek a peaceful solution, but on Saturday we will use different methods against these criminals," he said.

Tens of thousands of Libyans meanwhile gathered in Tripoli Wednesday to mark Eid al-Fitr, kneeling in prayer at the landmark Martyrs' Square as they rejoiced in the collapse of Gadhafi's rule.

At dawn, men, women and children began to pour into the Tripoli Square -- formerly known as "Green Square" -- decked out in their holiday best, as women ululated in triumph and spontaneous cries of joy erupted.

"This is the best holiday of my life," said Adel Masmoudi, who at 41 was born the year Gadhafi seized power.

An imam leading the dawn prayer at the square urged all Libyans to stand united and hailed the ouster of "the tyrant Gadhafi", prompting jeers from the crowd at the mention of the fallen strongman's name.

The rebels' fledgling new administration meanwhile received a major boost to its finances with clearance from a UN sanctions committee for Britain to release $1.6 billion in seized regime assets to pay for emergency relief.

In Rome, Italian Foreign Minister Franco Frattini said in an interview with Radio 24 on Wednesday that the fall of Sirte would signal the end of his 42-year regime, hinting that NATO's mission was also drawing to a close.

"If as I hope Sirte falls as a result of a peaceful surrender by Saturday that will be the last bastion signaling the fall of the regime," Frattini said.

The NATO mission in Libya "will conclude when Libya is free," he said.

Before you kill him, please give one lash for every dead person on the Lckerbie plane, for every dead person on the UTA plane, for every person in the Berlin disco explosion...Two per day so he will survive long enough to earn all his punishment... Then pull him limbs with 4 hourses at 4 ends like they use to do in the middle ages..A middle ages man deserves such an appropriate treatment!