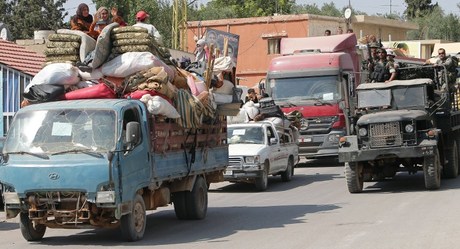 Hundreds of Syrian refugees tried to head home from the border town of Arsal on Thursday during a truce that was reached following clashes between army troops and foreign jihadists in the Bekaa region.

However, the refugee convoy failed to cross the border and retreated back to Lebanese territory.

"This might be because many refugees have entered Lebanon illegally and thus, do not carry legal documents," the state-run National News Agency remarked.

General Security chief Maj. Gen. Abbas Ibrahim had assured earlier that all “refugees with legal status can leave to Syria via al-Masnah.”

"And those who have entered the country illegally need to legalize their presence and then they can depart,” he told LBCI television.

And Syrian ambassador to Lebanon Ali Abdul Karim Ali announced that Syria's authorities are going over the list of refugees in cooperation with the General Security to find a way to secure their return home.

The truce, announced Wednesday night by Sunni clerics serving as mediators, has raised hopes of an end to the worst violence in the area since the conflict in neighboring Syria erupted in March 2011.

At least 17 soldiers have been killed battling the jihadists, who are reportedly from several different extremist groups fighting in Syria.

Another 22 soldiers have been captured, although 13 of them have been freed.

The exodus of refugees, who had reportedly sought to leave Arsal even before the clashes, was being facilitated by local authorities and a Syrian nun close to President Bashar Assad's regime.

Sister Agnes told Agence France Presse that 1,700 men, women and children, mostly from the Qalamun area just across the border from Arsal, were en route to the Masnaa border crossing.

Another 3,000 refugees among the 47,000 sheltering in Arsal have also asked to leave to Syria, she said.

The departure of the refugees came as the truce appeared to be holding and no clashes were reported on Thursday.

The truce was announced by the mediators, who said the gunmen in control of the town had agreed to withdraw and that soldiers and policemen being held hostage would be released.

"All the prisoners are alive and despite difficult negotiations we have clear and positive promises they will be released."

Army vehicles were deployed on the fringes of Arsal on Thursday and three trucks loaded with supplied entered the town, an AFP correspondent said.

"We see no armed men today" inside Arsal, said Wafiq Khalaf, a member of its town council, contacted by telephone. "They've all gone. We can't see them, unless they've gone into hiding."

A military source said the army could not verify the pullout until soldiers moved in.

"There is a lot of destruction," Khalaf said, with houses destroyed and shops set ablaze.

One of the mediators, cleric Hossam al-Ghali, said a Syrian refugee camp had been totally burnt down "and there are bodies inside. The place smells of death."

Medical services took advantage of the quiet Thursday to send in ambulances to evacuate at least 44 wounded people, both Lebanese and Syrians, the Red Cross said.

At least three civilians have been confirmed killed in the fighting, but the toll is believed to be much higher.

The United Nations High Commissioner for Refugees said Thursday it had reports from field hospitals of at least 47 people killed and 268 wounded.

The fighting in Arsal began after soldiers detained a Syrian man accused of belonging to al-Qaida's Syrian affiliate Al-Nusra Front.

Lebanon has sought to insulate itself from the raging war next door, but the conflict has regularly spilled over.

It currently hosts more than one million Syrian refugees, and the battle between Sunni-led rebels and Syria's President Bashar Assad has stoked existing political and sectarian tensions.

As the hundreds of Syrian refugees leaving Arsal passed through the neighboring town of Labweh on Thursday afternoon, some residents jeered and swore at them.

The clashes in Arsal have also raised tensions in Tripoli, where a homemade explosive device detonated near a military post on Wednesday night, killing one person and injuring six others.

why would someone require approval to return to his country of birth.... unbelievable!

If this is an official deportation then the receiving country need to approve before the deportees are transferred even if they are citizens. This is the case in all countries.

Because syria is not a sovereign country not even a country.... it is the property of the assad family.. so before visiting someone's house, you need his permission....
where are the lebanese abducted by the assad's thugs since 2 decades?

telecom and internet in the hands of the cousin of assad... still lebanon is better equipped ... sorry to disagree with you.... ironically we even have private parallel land lines....

as for myself.... my bread does not come from saudi / gulf / desertic, oily, dish dash.... inferior cultures....i control my destiny...

i see one historical advantage for Syria... now that the soviet system collapsed.. we have only left Cuba and Syria as living museum of how it was before - the USSR (what a pompous) name - is trying to copy the west....
By the way, im no sure which prisons are worst the goulag or mazze...

Well maybe the people you have in Arsal and Tripoli will bring better tourist.

Allah Yihmik Flamethrower for exposing their lies. Please, don't stop posting. This forum is not the same without you. I care....

Keep blaming everyone but ourselves ,the Lebanese, for our own misery. Until the Palestenian camps issue is resolved first and the corrupt officials I.e Berri, Gemayel, Gagea .....et al are replaced with rookie corrupt officials ( all politicians are corrupt. It's just that the existing ones have been there too long),nothing will change . Why have we not secured our borders? Cause some official(s) is making money somewhere. The Maronite Christians are as extreme as any other sect. Why can't I as a Catholic lebanese run for president? Blame the Syrians and everyone else. Good job.