Hale: U.S. to Deliver Aid to Lebanese Army within Weeks 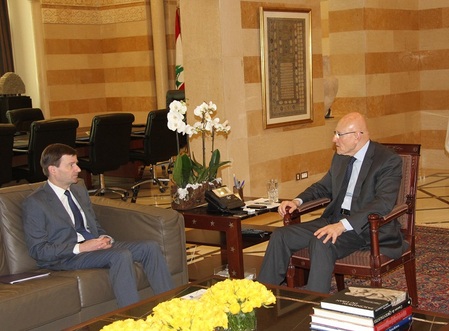 U.S. Ambassador to Lebanon David Hale announced on Thursday that his country will deliver an urgent aid to the Lebanese army within the upcoming few weeks which will continue in the months to follow.

He pointed out that the deal will include munition and ordinance for offensive and defensive combat.

Hale revealed that his country was meeting a request by the Lebanese army to attain emergency assistance.

“we are in intensive consultations with the Lebanese government and our partners about how to best respond to additional needs of the Lebanese Armed Forces,” Hale told reporters.

The diplomat considered the “deliveries are part of a long-standing U.S.-Lebanese military partnership,” noting that his country's assistance to the army has exceeded $1 billion since 2006.

Following the 2006 summer war between Israel and Hizbullah, the army deployed in southern Lebanon — Hizbullah's heartland — for the first time in decades, with the help of U.N. peacekeepers. Since then, the U.S. has stepped up its military assistance to the Lebanese army.

Hale expressed satisfaction regarding his country's strong partnership with the LAF.

“We continue to stand with Lebanon and with the LAF and ISF as they protect the country from the spillover of violence from Syria.”

The fighting that erupted in the northeastern town of Arsal on August 2 between Islamist gunmen and the Lebanese army has raised new concerns about the effects of the Syrian conflict on Lebanon.

Despite officially distancing itself from the war, Lebanon's existing sectarian and political tensions have been worsened by the conflict next door.

It is also hosting more than one million Syrian refugees, who have tested its limited resources and the patience of its four million citizens.

Some assistance of use please this time around. No more boots and transportation units.

Only in Lebanon do we hear about putting conditions on free assistance and gifts. Our government has never spent a dollar toward arming our military, our budget is 100% geared toward salaries and cost of social services and medical assistance to the military. 100% off the needed weapons and equipments are dependent on foreign aid and grants, yet, the public places conditions on those countries who come to our aid while we are in dire need off support even for the basics such as ammunition and transportation vehicles. It amazes me the level of arrogance we demonstrate that shows a sense of entitlement.

Give the LAF apache attack helicopters if the US is for real. all 1980 gulf war hummers are and cesna planes are useless.

The alternative is to stay with 1950's vehicles in place of the HMMWV and have no helicopters. Another classic example of arrogance when you are being handed well needed military assistance. So if it is not the latest technology, with the most advanced weaponry, it is deemed useless. It is equivalent to when you give a hungry beggar a loaf of bread and he rejects it because he rather have a steak instead.