Gul 'Frozen out of Running' for Turkey PM 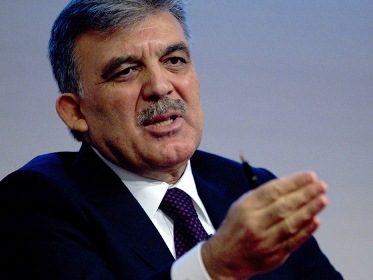 Erdogan is set to be sworn in as president on August 28 after his first-round election victory, and some observers had seen his longtime ally Gul as a possible replacement as prime minister.

But amid speculation of a growing rift between Gul and Erdogan, the deputy chairman of the ruling Justice and Development Party (AKP), Mehmet Ali Sahin, said the outgoing president had no chance of becoming premier.

"After his term expires Abdullah Bey will not be able to become prime minister... because he is not a member of parliament," Sahin said, using a traditional Turkish form of address.

But Sahin said in televised comments there was "no resentment" within the party about the exclusion of Gul, given that the reasons for his ineligibility were clear.

Some analysts have argued that the whole succession process has been set up with the specific aim of making sure Gul cannot become premier and party leader.

The AKP executive committee is due to meet this Thursday to agree on who will simultaneously hold both the posts of premier and party leader.

Sahin was equivocal about what role Gul could play in the future as Turkey prepares for 2015 legislative elections.

"Time will tell which duties fall on who," he said.

Gul co-founded the AKP with Erdogan but in recent years has taken a more conciliatory approach than the combative premier, particularly after the anti-government protests of 2013.

His exclusion will disappoint those -- particularly in financial markets -- who hoped that Gul would play a moderating influence in an Erdogan presidency.

The Milliyet daily on Sunday reaffirmed Davutoglu was the frontrunner to become prime minister in a government that appears set to be filled with Erdogan loyalists.

The head of Turkey's secret service, Hakan Fidan, was a likely choice to replace Davutoglu as foreign minister, although Europe Minister Mevlut Cavusoglu was also under consideration, it said.

Deputy Prime Minister Ali Babacan, the government's economic pointman who is highly respected by markets, could leave the government and be replaced by top party official Numan Kurtulmus.