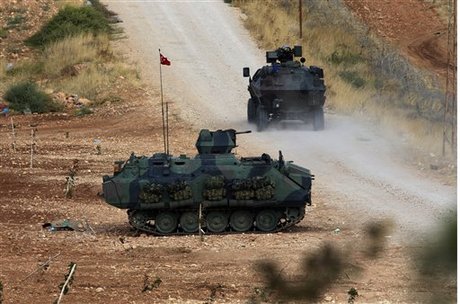 Heavy clashes erupted on Friday between Kurdish militiamen and Islamic State jihadists who have besieged a key Syrian town near the Turkish border, an Agence France Presse correspondent reported.

IS militants in Syria have advanced to within just a few kilometres of the eastern and southeastern edges of Kobane, known as Ain al-Arab in Arabic, despite US air strikes in support of Kurdish fighters.

Heavy mortar fire around the town was heard across the border and plumes of white smoke were rising up, the correspondent reported from the Turkish side of the border.

"We are desperately watching what the murderer IS is doing," said 48-year-old Turkish Kurd Cafer Seven, who came to Mursitpinar border crossing 10 days ago from the Turkish city of Van.

"We are in deep sorrow. Our brethren are under difficult conditions. This is brutality!" he said, as he gazed at the heavy smoke rising over Kobane.

Kurds have expressed anger and disappointment over Ankara's policy against IS, accusing the government of turning a blind eye to the group and refusing to allow Turkish Kurds to cross the border and fight in Syria.

"There is a massacre being committed before the eyes of the world. The world remains silent when Kurds are being massacred," said Burhan Atmaca, 54, who also came to Mursitpinar to show solidarity with Kurdish fighters in Kobane.

Turkey's parliament on Thursday endorsed a measure authorising military action against the jihadist group, which has captured large areas in Syria and Iraq, declaring an Islamic "caliphate" and carrying out a wave of atrocities including beheadings.

IS fighters launched a major offensive against Kobane on September 16, sparking an exodus of more than 160,000 mainly Kurdish refugees into Turkey.

Some 90 percent of residents of Kobane and nearby villages have fled for fear of an imminent assault by the IS, Britain-based Syrian Observatory for Human Rights said Thursday.

"There is a massacre being committed before the eyes of the world. The world remains silent when Kurds are being massacred," said Burhan Atmaca, 54, who also came to Mursitpinar to show solidarity with Kurdish fighters in Kobane.

Sure, but when your fellow sunni citizens in Iraq were being massacred by Malki, the revolutionary guard of Iran, and HA you were no where to be seen. SO, enjoy it now

God bless the Kurdish people and protect them from the pure Evil that is ISIS. Dave UK.