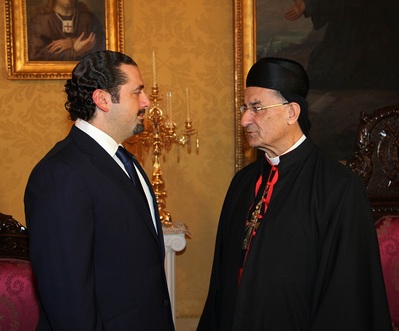 Al-Mustaqbal movement leader MP Saad Hariri on Monday stressed the need to elect a “consensual” president as he reiterated his rejection of holding parliamentary polls before the presidential vote.

“The priority in the country is the election of a new president and we as political forces must make initiatives and elect a president who enjoys everyone's approval,” said Hariri after a closed-door meeting with Maronite Patriarch Beshara al-Rahi at the latter's residence place in Rome.

“This does not mean that we are with extending the parliament's term and with forgetting about the presidency, as we see extension as a necessity aimed at avoiding the unknown,” Hariri explained.

He said talks with the patriarch touched on the issues of the economic difficulties in Lebanon, the Syrian refugees and the security problems, “but the main focus was the presidency.”

“The most important thing for the patriarch is the election of a president and we know that extension (of the parliament's term) is a bitter cup that we are obliged to drink,” the ex-PM added.

“After the election of a president, a government would be formed and we would then hold elections after 6 months,” said Hariri.

“We, as March 14 forces, must seek to find a consensual candidate for the presidency,” he went on to say.

Prior to the closed-door talks, al-Rahi told reporters in Rome that he and Hariri speak “the same language.”

Former “premier Hariri and I always speak the same language,” al-Rahi said as he entered the meeting.

Upon his arrival, Hariri had met al-Rahi in the presence of the patriarchate's envoy to the Vatican Bishop Francois Eid, his deputy Monsignor Tony Jebran, head of the ex-PM's office Nader Hariri, ex-MP Ghattas Khoury and Hariri's adviser Daoud al-Sayegh.

Talks were to continue over a dinner banquet, according to Hariri's press office.

Meanwhile, Future TV said the discussions will address “the repercussions of the crisis in the region, their impact on Christians in the Levant and the need to spare Lebanon the fallout.”

MTV for its part said the issue of extending parliament's term will consume most of the talks' time at the expense of “the rest of the Lebanese and regional security issues.”

Sources told LBCI television meanwhile that al-Rahi “won't support any changes to the political system” while Hariri is supposed to brief him on the outcome of his efforts to “support and equip the Lebanese army.”

The meeting between the two men is the first since March, when Lebanon's presidential crisis started to loom on the horizon.

The country plunged into a political vacuum as president Michel Suleiman's term ended on May 25 and the rival political forces have so far failed to elect a successor despite having held more than a dozen electoral sessions.

why do we need consensus when parliamentarians can simply show up and vote... and keep voting until someone is elected president. what is march 8 so afraid of? no more mafia style agreements. time for constitution, responsibility and accountability.

Lol like if it's an opinion article fine but it's supposed to be a fact-based news article. Mouthpiece used in this context is derogatory

It wasnt meant to be derogatory, the choice of the word could have been better though.

It's still derogatory, the contributor could have easily wrote affiliate. It's like how everyone calls al-Manar a Hezbo mouthpiece. Same thing. This is supposed to be an unbiased article, not an opinion piece. If it's an opinion piece then I'm fine with it. But it isn't

lahoud allowed this, really? I though the coward army deserter said that the president has no powers, you did too didn't you. No, Geagea got out of jail following an amnesty law passed in parliament and Aoun's Mps voted to pass. But Flamy the Syrian full time paid propagandist tool and fake Aouni forgot to mention this.