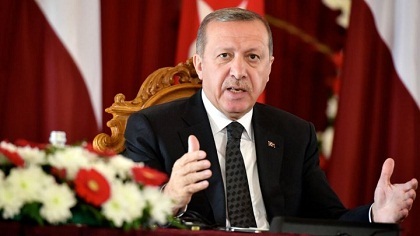 The main Kurdish party in Syria "does not want" Kurdish peshmerga fighters from Iraq to come to help it fight Islamic State jihadists trying to overrun the town of Kobane, Turkey's president has asserted according to reports Sunday.

Turkish President Recep Tayyip Erdogan told Turkish reporters aboard his presidential plane that the Syrian Kurdish party the Democratic Union Party (PYD), which has been leading the defense of Kobane, feared losing its influence in northern Syria when the peshmerga arrive.

"The PYD does not want the peshmerga to come," Erdogan said in comments published by newspapers including the Milliyet and Hurriyet dailies.

"They don't want that the peshmerga to come to Kobane and dominate it," he added.

"The PYD thinks its game will be spoiled if the peshmerga come. Their set-up will be ruined," he said.

Turkey last week unexpectedly announced that it will allow peshmerga fighters from the Kurdistan region of northern Iraq to cross its territory to join the fight for Kobane.

However the deployment has yet to take place. Some reports said it has been put back to next week. What relationship the peshmerga will have with the PYD on the ground remains to be seen.

Ankara has long accused the PYD of failing to distance itself from Syrian President Bashar Assad and being the Syrian arm of the Kurdistan Workers Party (PKK), which has waged a three-decade insurgency for Kurdish self-rule in Turkey.

"The PYD is a terror group just the same as the PKK," said Erdogan. "The PYD can accept this or not, but we know and see the practices of the PYD," he said.

In contrast to its acrimonious ties with the PYD, Ankara has in the last years built up a close relationship with the regional authorities in Iraqi Kurdistan, who control the peshmerga.

Erdogan said last week that the peshmerga would be joined in the defense of Kobane by 1,300 fighters from the anti-Assad Free Syrian Army (FSA).

Mr. Erogant, sorry, Mr. Erdogan, you're lying right through your teeth. Jeez, it will take a complete moron to even listen to what you've said.

Erdogan will drag Turkey down in the mud.

He already has Habib, Erdogan has returned Turkey into an era most Turks did not want. The man is a con-artist and has literally never been truthful. He is no better than ISIL who he closely supports. But apparently his downfall will come from the Kurds whom he has always victimized.