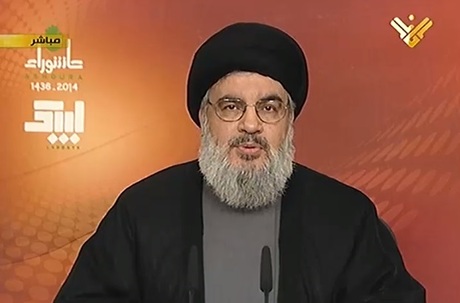 “Nowadays, the prime responsibility in the Islamic world for stopping the proliferation of this ideology falls on the Kingdom of Saudi Arabia,” Nasrallah said in a televised speech.

“It is not enough to create an international coalition and bring the armies of the world to fight ISIL (Islamic State). My remarks are addressed to everyone: close the schools that are educating the followers of this ISIL ideology … and stop labeling people as polytheists for the most trivial reasons,” Nasrallah added.

In June, the IS declared an "Islamic caliphate" straddling vast swathes of Iraq and Syria, ordering Muslims worldwide to pledge allegiance to their chief Abu Bakr al-Baghdadi.

The U.S. has formed a coalition of Western and Arab allies to battle IS, which has been accused of widespread atrocities in Iraq and Syria, including mass executions, beheadings, rape, torture and selling women and children into slavery.

.Down with HA,ISIS and co

How about Iran and how it got rid of the moderate shah? How was the economy of Iran during the shah days versus today?
The world is a safer place with Israel and Iran off the map.

Hassan Nasrallah, one of the main reason for the rise of Sunni Islam extremism (and terrorism) is to counter the imperialist politic of the Iranian Islamic revolution that has succeeded since over 30 years to create loyal political and armed forces in many arabic countries.

Dont forget nasrallah humself invited the imperialist army to take over lands and pil and buy out pupppet lesders in the srab world ina. Concentrated effort to destroy our cukture and drive away our youth for the gain of a few elites in the federal reserve and the military industrial complex. Walaw.

Sorry for all the typos haha

I remind people that the Syrian opposition was about to Crush ISIL early in the year before it was saved by the Assad regime and its allies. So the enabler of ISIL is the last one to talk.

Wow you're uneducated, all I'm saying is they're both equally extreme, yet hypocritical. Where in anything I wrote equates with supporting ISIS? Tell me Flamethrower :)

My apologies, I misread.

lol arabdemocrat, how exactly was it "saved by the Assad regime"? take your bedtime stories elsewhere please.

it was saved as bashar never really fought ISIS LOL

looooooool at your articles peace, yes i've heard that propaganda before, but statements by "Al-Saud, a Syrian dissident with the National Coalition for Syrian Revolutionary and Opposition Forces" do not really constitute anything credible.
hahahah what a goof you are.

your articles are hilarious, they discredit themselves in their first paragraphs:

"The Syrian regime of President Bashar al-Assad has funded and co-operated with al-Qaeda in a complex double game even as the terrorists fight Damascus, according to new allegations by Western intelligence agencies, rebels and al-Qaeda defectors."

in the mean time, NATO is letting the oil ISIS is stealing pass through NATO member turkey's territory, and the EU has voted a law that allows them to buy that stolen oil. you're such a joke peace, i sometimes feel sorry for you

poor mowaten you are so naive or brainwashed LOL .....

i guess that too never happened ! LOL

oh! by the way mooowaten : what are your sources that make you so sure all i say is BS?
el manar? otv? voltaire.net? iranpress?

as i said above, they discredit themselves. do you understand what that means?

what are your sources to tell me mine are BS , mooowaten?

no sources? exactly what i thought.... zero arguments but total barking...

In Yemen - you have a militia supported by Iran taking large part of the country and imposing its will through force. Where does this remind me of??? Anyone?

And 'lebanonarmy occasionally': Has it crossed your mind that large part of the Lebanese army is from that 'Shitty' Sunni community and if they decide to defect, there would not be Lebanon. Indeed they are fighting these gunmen and they are dying. In Nahr Al Bared, the majority of army dead were from the shitty community. Ask yourself what would personnel from the army belonging to a specific sect do if the army fights Hezbollah? Why do you think the army did not do anything when the Hezb and allied militia invaded Beirut in Mount Lebanon? Let me spare you: They knew if they did, large part of the army will defect to the Hezb.

I totally agree with Nasrallah on Wahhabism. Hopefully the counter-reaction will be more social freedoms in Iran.

Lebanon needs a President with the strength to make tough decisions.
there is only 1 leader GEAGEA
May GOD Bless Him and give him all the strength to clean Lebanon from all its criminals.

lol you think he'll clean lebanon from himself?

The terrorist sectarian is lecturing virtue and moderation. Shameless and Immoral

11 hours ago Nasrallah: Scenes of slaughter and mass massacres are being broadcast live and this has major impact on minds and sentiments.

and your massacres are done in secret?

A known terrorist, a sectarian, an agent of iran, and a traitor are few of the words that describe him.

"ArabDemocrat.com" in yemen you have al qaeda terrorists killing civilians by the hundreds. what does that remind you of?
http://www.reuters.com/article/2014/10/20/us-yemen-crisis-fighting-idUSKCN0I91PO20141020

even bombing hospitals and slaughtering survivors inside it:
https://www.youtube.com/watch?v=dJEi1SxDmlY&html5=1

thank you dr ghabby for sharing your psychology knowledge with us.

mooowaten: do not forget that iran allied with al Qaeda in yemen when it suited therir interests.... so do not come here and picture your terrorist organisation as "patriotic".... as they are as terrorists as the takfiris.... but more hypocrit like you....

peeeeeeace how can i "forget" something that never happened? your stale propaganda lies make you sound really desperate.

we understand it is difficult for your to have something other than a binary look on things...
difficult to admit that those you support are NO better than those you fight! it s a hard blow so no wonder you won't believe it! lOL

Sayed Hassan, despite all your attempts to wiggle out of this situation, you just cannot exonerate yourself or your party from culpability, you too ya Sayed, you are root cause to many of our headaches, ISIL included.

Yea right, not those who funded them and planned this whole thig. Is iraq and syria his fault too? Get real. The only one wiggling are thise trying eveything to pin the blame on hezbollah. Just face the facts, your m14 leaders are sell outs and liars.

strange this mowaten, really strange. He does not see the fake accounts and does not write a paragraph of condemnation and questioning how naharnet allows these trolls. In fact, he makes them himself and votes them up

lol peace. you can keep your "non-binary thinking" if that involves making up all sorts of BS to justify your bias and the hatred patterns you are stuck on.

The fault lies on those whom supported the takfiri insurgency in Syria, many naive people, thought it to be legitimate. Now the same takfiris hit Lebanon, and you still blame Hezbollah. Those takfiris were in Syria long before Hezbollah intervened, so get your facts clear.

The irony? Most can say the same about you.

I think you should follow politics a little better, before commenting in here Elemental. Better yet, you should stick to "Rock and Roll"

A caliphate has never been the Resistance goal, quite the opposite they reject any caliphate before the last Imam appears.

Second, if they really wanted a caliphate, they could've made one already.

Da3ish on the other hand, wants to force Islam on others, and force them to convert or die.

Hezbollah doesn't do this, and everyone in Lebanon knows this.

hezbollah just hijacked lebanese chiism to align it with iran...
1/ they pledged allegiance to the islamic revolution not to lebanon... but they do not want a caliphate true.
2/ they named a secretary general for life when before he used to be elected...
3/ they put aside every cleric that wanted a lebanese chiism and forced people to follow the iranians when chiism allows you to adapt to the country you are in... wilayat elfakih....

so yes hezbollah do not want a caliphate, they are smarter than that: they just imposed their power over the chiites and over Lebanon with their weapons.... but in depth = they are the same fanatics, chia style!

I see our Iranian counterparts are out in full force today. You both want your caliphates, and are no better than ISIS.

We could only wish the same for HA.

Naharnet deleted my comment for "unknown reasons", again let me repeat. The M14 leaders were backing the takfiri insurgency in Syria, long before Hezbollah had any say on the matter, yet you still blame Hezbollah. The Al Nusra Al Qaeda and Da3ish, were killing civilians long before this joke of US/Arab coalition intervened.

These takfiri groups were ravaging in Syria, long before Hezbollah intervened in May 2013. Back then, we didn't hear anyone complain here in Lebanon, it was after the takfiris started killing Lebanese soldiers, that you started to wake up. Better late than never, same goes for you Naharnet authors.

Also remember the Dinniyeh battles. Was Hezbollah also to blame for those?