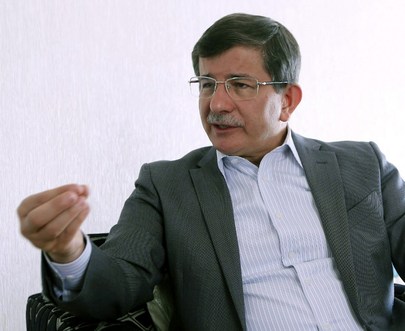 In an interview with the BBC broadcast on Tuesday, Davutoglu called for an "integrated strategy" with the United States to equip and train the FSA and oust Assad from power.

He indicated that Turkey would only offer its air bases and other facilities for the international coalition fighting Islamic State (IS) if such a strategy were pursued.

The United States should "equip and train the Free Syrian Army so that if ISIS leaves, the regime should not come," he said, using another name for IS.

"So there is a need for an integrated strategy."

Turkey is fearful that Kobane could be taken over by Kurds allied to the Kurdistan Workers' Party (PKK) which has waged a three-decade insurgency for self rule and is regarded as a terrorist group by Turkey, the United States and most of Europe.

He said Turkey would be prepared for the U.S.-led coalition to use its facilities such as the Incirlik air base for raids against IS only if "we have a common understanding for a new pluralistic and democratic Syria".

Turkey has been criticized in recent weeks for failing to help the U.S.-led coalition and Kurdish fighters seeking to prevent IS from taking over Kobane, which lies just a few kilometres from the Turkish border.

A contingent of Kurdish peshmerga fighters from northern Iraq is expected to transit Turkey to bolster the defense of Kobane in the coming days, with along reinforcements from the FSA.

Turkey is going to burn its fingers soon, you took one bad decision after the other, you've let into your country every darned single terrorist to go and fight in Syria, now you want the defunct Syrian opposition to control Kobane? How foolish the Turkish administration is, typical Islamist radicals that can't see beyond their noses nor able top count to 10. The Kurds have shown the mettle they have, one of them is worth 1000 FSA fighters and 100 ISIL fighters, what do you think keeps Kobane from falling. Silly Turks.