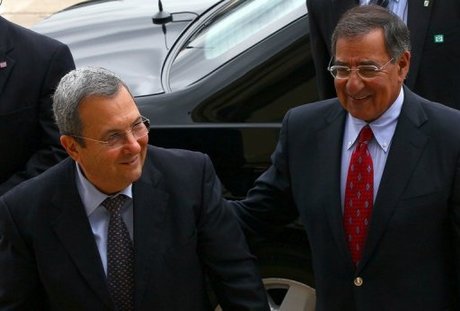 Israeli Defense Minister Ehud Barak and his U.S. counterpart Leon Panetta met Monday at the Pentagon to discuss political changes in the region ahead of the Palestinian bid for statehood at the United Nations.

At the second Pentagon meeting for the two defense leaders since Panetta became Defense Secretary in July "Panetta and Barak each stressed the importance of the close security ties that bind the two nations, including America's continued commitment to ensuring Israel's qualitative military edge," Douglas Wilson, a Pentagon spokesman, said in a statement.

Panetta and Barak "focused on a range of issues, including Iran, political changes in the region, counterterrorism and global economic conditions," the spokesman said.

The U.S. defense chief "will travel to the region in the near future when he is expected to meet again with Barak," the spokesman added.

The talks come as the Palestinian Authority presses its bid on U.N. membership in New York.

Palestinian president Mahmud Abbas wants to press ahead with a vote on full U.N. membership of a Palestinian state at the Security Council before exploring other options, a top official said Monday.

Abbas told U.N. Secretary General Ban Ki-moon that he would formally submit a bid for the United Nations to recognize the state of Palestine as a full member of the world body on Friday.