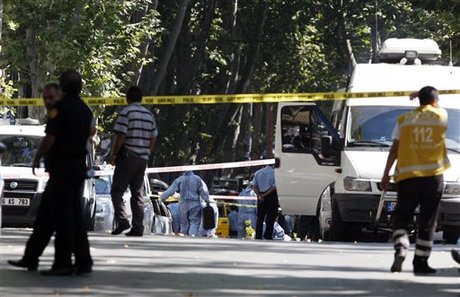 A powerful bomb rocked the center of Turkish capital Ankara on Tuesday, killing three people and injuring at least 15, the interior minister said, as immediate suspicion fell on Kurdish separatists.

"Three citizens were killed and 15 were injured, five of whom are in critical condition," Interior Minister Idris Naim Sahin told Turkish television.

Sahin said there was a "high possibility that it was a terrorist attack," using the government's shorthand for attacks by the outlawed Kurdistan Workers' Party (PKK).

President Abdullah Gul, on an official visit to Germany, strongly condemned the attack, which he described as "inhuman".

The bomb, which went off outside the administration offices for the capital's central Cankaya district, blew out windows in shops and offices, damaged cars and sparked a fire which was put out by firefighters, media reports said.

The offices are near downtown Kizilay square in the city of four million people, that is home to many government buildings as well as military headquarters.

The blast comes days after Prime Minister Recep Tayyip Erdogan said Turkey was ready to launch a ground assault on camps of the rebel Kurdistan Workers' Party (PKK) across the border in northern Iraq in reprisal for a recent spate of rebel attacks.

Turkey's government has been considering a series of measures in the face of the upsurge in attacks, including a request to parliament to extend its authorization for cross-border military operations for one more year after it expires next month.

Turkish aircraft have repeatedly bombed PKK bases in northern Iraq since August 17. According to the government, more than a 100 rebels have been killed.

Turkey has launched 25 cross-border land operations against PKK targets in Iraq during the last 25 years. The latest incursion was in February 2008.

The PKK, listed as a terrorist group by Ankara and much of the international community, took up arms in Kurdish-majority southeast Turkey in 1984, sparking a conflict that has claimed about 45,000 lives.

Several outlawed armed groups -- Kurdish, Islamist and leftist extremist -- have carried out bomb attacks in Istanbul in the past.

In May 2007, a suicide bomber killed six other people in an attack in downtown Ankara, which was blamed on the PKK.

Bomb attacks on HSBC bank and the British consulate in Istanbul in 2003 left 57 people dead.

In May of this year, a bomb left near a bus stop in central Istanbul injured eight people.

HIZBUSTAN did it so it can blamed on Israel to further deteriorate relations with Turkey.

No not revenge,
Conspiracy to distract major political world recognition for Turkey