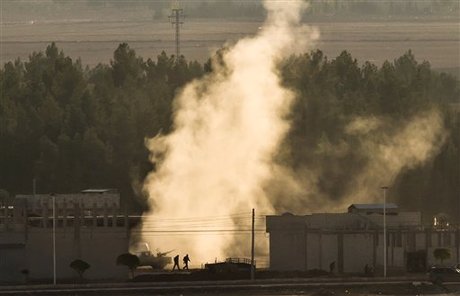 Turkey and the United States have agreed a plan under which some 2,000 fighters from the moderate Syrian opposition would be trained on Turkish soil, a report said Saturday.

The fighters from the Free Syrian Army (FSA) will be trained at the Kirsehir base some 150 kilometers (90 miles) south of the capital Ankara by both Turkish and U.S. personnel starting from late December, Hurriet Daily News reported, quoting unnamed officials.

The United States will provide weapons for the fighters and is also expected to pay for the training, the English-language daily said.

The agreement was reached after a third round of talks between Turkish and US military officials in Ankara, the daily said.

The officials did not, however, reach an agreement on the training of Syrian Kurd fighters from the Democratic Union Party (PYD), who are leading the battle against Islamic State jihadists for the key border town of Kobane, the paper said.

The United States is due to train these fighters in Iraq's Kurdish region, it said.

President Recep Tayyip Erdogan has insisted that the PYD fighters are part of a "terror group" allied to the Kurdistan Workers Party (PKK) who have fought Turkish security forces in a three-decade insurgency for Kurdish self-rule.

What is moderate rebels?

There is no moderate groups in Syria. They are all takfiris, whether you can admit it or not.

No moderates in Syria said the guy with a dead fundamentalist islamic jihadi terrorist as his avatar..LOL

No man, moderates are hezbollah, jeich bader, faylak el kodoss, liwa abou fadhal el abbass....
Man go have some chupachups, beat urself in memory of karbala2 chant some Labayka ya nosrolah and enjoy the shit ur dear modern secular and democratic friends have put us in..
Retard

What does the Iranian Islamic regime stands for? Is it not Political Islam, financing extremist Islamic militias such as Hizbollah, Hamas, Huthis, Islamists in Sinaii, Islamic regime in Sudan?
Come on! IS and Nusra are certainly takfiris terrorists but you cannot hide that there are non Islamist moderate opposition forces fighting the tyrannical regime of Assad that your friends support.

A moderate today, a radical tomorrow.