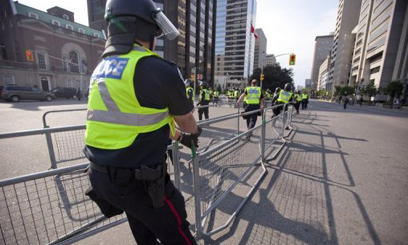 Canada arrested three men on terrorism-related charges in as many days because they represented a "serious" potential threat, the country's top public safety official said Tuesday.

"If accusations are laid, it's because there's a serious reason to believe they are potential terrorists," Public Safety Minister Steven Blaney told CBC television.

On Monday, authorities in Ottawa arrested Suliman Mohamed, 21. He faces charges of participating in the activities of a terrorist group, and conspiring to participate in terrorism with 24-year-old twin brothers who were arrested on Friday.

Carlos Larmond was apprehended at Montreal's international airport just before departing to "travel overseas for terrorist purposes," the police said.

Ashton Carleton Larmond was charged with "facilitating terrorist activity" and participating in a terrorist group. Carlos was headed to Syria, the CBC reported.

Royal Canadian Mounted Police Chief Superintendent Jennifer Strachan earlier said the arrests underscore that there are Canadians "who have become radicalized to a violent ideology, and who are willing to act upon it."

The justice system will move on these cases, Blaney said.

"We have to be under no illusion that those breaking the criminal code will face it," he said.

The arrests come after Islamist attacks in France killed 17 people, including 12 people at the satirical magazine Charlie Hebdo.

In October, two soldiers were killed in separate attacks in Canada. In one, a soldier was fatally shot while standing watch at the War Memorial in Ottawa. His attacker then stormed into parliament and exchanged fire with police before being shot dead.

The incident came a day after another attacker ran over a soldier in Montreal, killing him before being shot dead by police in turn.

Blaney vowed Canada would remain steadfast in its fight against terrorism.

"We have to remain vigilant, but also send a strong signal," he said.

"We will stand up, we will work together within the scope of the law because we are a democracy."