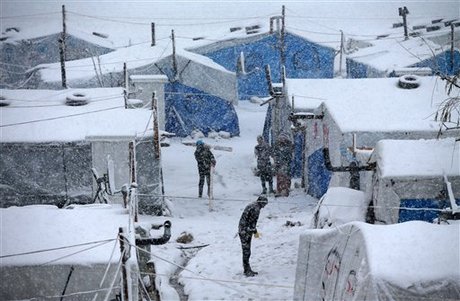 A U.N. official said on Tuesday that the flow of Syrian refugees into Lebanon has dropped sharply due to restrictions recently imposed by Lebanese authorities.

Although Lebanese border officials began informally restricting the entry of Syrians last October, the country officially imposed visa regulations earlier this month on their neighbors. The move was the first such in decades.

Ninette Kelley, the U.N. refugee agency's representative in Lebanon, told reporters that the number of new Syrian refugees in Lebanon dropped by 44 percent in 2014, compared to the previous year.

The UNHCR says there are about 1,150,000 Syrian refugees registered in Lebanon now. Beirut estimates there are another 500,000 unregistered Syrians in the country.

Good news, now let's create better news, let's start deporting them back to their country. The funny thing is this, the Syrians when holidays come, they just take the bus or even the plane to go and spend some time with their families in Syria. Now I care less which area that would be, but everyone knows of this, so why do we have to keep them? It's true, some remain genuine refugees for a variety of reasons, we can still keep them here for a while longer, but the rest, or better known as opportunists, these should be shipped out immediately, why keep spending on these? Why should we accept to sit idly by and watch them steal our jobs and businesses? I very much believe that little Lebanon has more than done its part of hospitality, time for them to go, period.