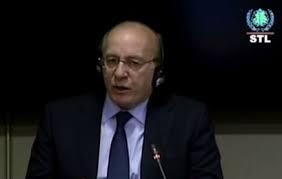 Former MP Ghattas Khoury concluded on Wednesday his testimony before the Special Tribunal for Lebanon, revealing that the Syrian regime did not heed calls to refrain from harming Lebanese officials.

He said in his cross-examination by the Defense: “The international community had warned Syria against harming former Premier Rafik Hariri and MP Walid Jumblat, but it ignored it.”

“Damascus did not care about the international community's calls as demonstrated by what happened and what is happening now in Syria,” he said reference to Hariri's assassination in 2005 and to the ongoing conflict in the neighboring country.

He spoke of efforts to bring together the various factions of the Lebanese opposition, lamenting that it was only possible after Hariri's assassination.

The opposition groups finally gathered on the same day as his assassination on February 14, 2005, recalled Khoury.

Asked about the issue of “false witnesses” in the Hariri assassination case, the former MP said that this matter is political and was only brought up during the tenure of former Prime Minister Saad Hariri.

On Tuesday, Khoury recounted details of the events that preceded Rafik Hariri's assassination.

He claimed that there were threats against his life by the Syrian regime, referring to an al-Hayat article mentioned to him by slain Minister Bassel Fleihan in 2005.

The article addressed alleged threats by Syria against Hariri and Jumblat.

The STL is tackling the February 2005 assassination of Hariri and 22 others in a major bombing in Beirut.

It is currently listening to the testimonies of a number of witnesses who were close to Hariri in the months preceding the assassination.

Khoury's testimony will be followed by witness Salim Diab on January 22 and 23.

To me, it is clear who is the assassin.