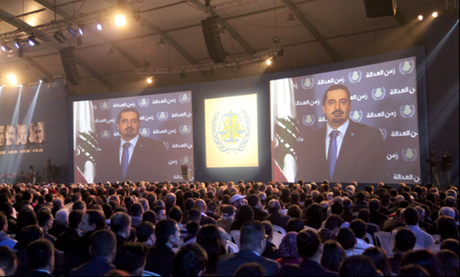 Head of the Mustaqbal Movement MP Saad Hariri is scheduled to make an address during a ceremony marking the tenth anniversary of the assassination of former Premier Rafik Hariri on February 14, reported al-Joumhouria newspaper on Saturday.

His speech will likely tackle the contentious issues that have not been addressed during the Mustaqbal-Hizbullah dialogue, it reported.

These topics include the Special Tribunal for Lebanon, Hizbullah's fighting in Syria, Lebanon's commitment to international resolutions, starting with resolution 1701, and Lebanon's ties with Arab countries.

The daily reported however that Hariri's speech will likely not affect the Mustaqbal-Hizbullah talks seeing as the former premier is keen on easing sectarian tensions in the country.

He will therefore likely emphasize his commitment to dialogue during his address.

Former PM Rafik Hariri was killed in a massive bombing in Beirut on February 14, 2005.

The March 14 coalition, which was formed in the wake of the assassination, has blamed Hizbullah's ally Syria of being behind the attack.

The coalition is expected to commemorate the anniversary during a ceremony at BIEL exhibition center in downtown Beirut on February 14.

The STL has been set up to investigate the murder and try the suspects.

It has so far indicted five Hizbullah members of being involved in the crime.

The party has denounced the tribunal as an American-Zionist entity aimed at destroying it.

Hizbullah chief Sayyed Hassan Nasrallah has vowed that the suspects, who are still at large, will never be found.

So he wants to bring up issues not being discussed in the talks, but he's committed to dialogue that won't tackle these issues - or if Mustaqbal tries tackling them Hezbollah will stonewall them... Saad you're still appeasing Hezbollah.

I assume you're calling the man in my picture handsome and not my actual self, but you don't need to convince me about "Houthis" (lol) being untrustworthy. I already know all that. But let's make it clear that these Houthis are only Hezbollah and not all Shi3a. There are shi3a against Hezbollah's stances but their voices will never be heard because you know how life works in the 961...

There's a difference between genuinely supporting Hezbollah and being forced to because they pay for your kahraba and moteur. Hezbollah owns most of them, but that doesn't mean they particularly enjoy it or have much of a choice but to support them.

Other than* support them

Flamey, stop trying to change the F-ing subject. All I said wad they have to support Hezbollah because their payments are covered. I wasn't talking about worst offenders of anything, but of course in your sectarian brain you think I'm accusing only Shi3a of not paying their bills. Read what I'm saying before saying random BS.

The subject of free kahraba came about because I was talking about Shi3a support for Hezbollah, whether its genuine or reluctant.