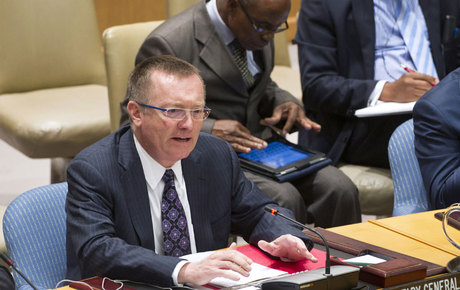 The failure by world donors to deliver billions of dollars of aid to rebuild Gaza is jeopardizing efforts to avoid a new flareup in the Palestinian territory, a senior U.N. official warned Wednesday.

U.N. political affairs chief Jeffrey Feltman told the Security Council that donors who had promised $5.4 billion to the Palestinians at the Cairo conference four months ago "have yet to fulfill the vast majority of their pledges."

"This is, quite frankly, unacceptable, and cannot continue if we hope to avoid another escalation in Gaza," Feltman told the 15-member council during a meeting on the Middle East.

"Failure to deliver the necessary support is putting an almost unbearable strain on an already highly fractious environment," he said.

Gaza was devastated by the 50-day war in July and August that left 2,200 dead on the Palestinian side and 73 on the Israelis side, while 100,000 Gazans lost their homes.

Feltman said more than 75,000 people have been cleared to receive construction material to rebuild, and over 47,000 had been able to purchase building supplies.

The delivery of construction material is heavily controlled by the United Nations and Israel to prevent supplies from falling into the hands of extremists.

In a sign of growing impatience with pace of reconstruction efforts, dozens of protesters forced their way into a U.N. office in Gaza on January 28, after the world body announced it was suspending an aid program to support home repairs and refugee shelter assistance.

Feltman described the situation in Gaza as "increasingly worrisome" and cited the slow pace of reconstruction along with security and governance problems as creating "an increasingly toxic environment."

The donors' failure to release promised funds comes as Israel withheld for a second month the transfer of tax revenues to the Palestinian Authority to punish the Palestinians for joining the International Criminal Court.

Over $200 million is owed to the Palestinians, forcing them to turn to private banks for loans to pay salaries of civil servants, Feltman told the council.

"This approach is neither sufficient nor sustainable," he warned.

The United Nations is pushing for Israeli-Palestinian peace talks to resume, but that track appears to have gone into a deep freeze ahead of the Israeli elections on March 17.