Syria Rebel Defeat Deals Blow to U.S. Hopes against IS 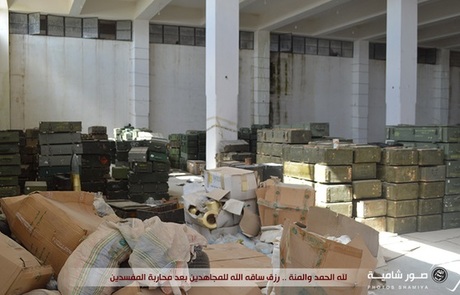 The apparent disintegration of a key Syrian rebel group has dealt a major blow to U.S. efforts to build up a force of moderate fighters to take on the Islamic State group.

The Hazm movement was seen as a cornerstone of the train-and-equip program Washington hopes will bring thousands of non-extremist fighters to bear against IS in Syria.

But after suffering a devastating defeat at the hands of al-Qaida's Syrian affiliate at the weekend, Hazm appears to have disbanded, with many of its fighters reported to have joined an Islamist coalition.

"The collapse of... Hazm means that, in effect, there is no substantial and credible Western-backed 'moderate' opposition throughout most of Syria," intelligence consultancy The Soufan Group said in a brief.

Mainly present in Idlib and Aleppo provinces in northern Syria, the group, known in Arabic as Harakat Hazm, consisted of several thousand fighters and was last year cited by U.S. Secretary of State John Kerry as likely to receive U.S. arms and training.

Its creation was announced in January last year as a coalition of a dozen rebel groups from the Free Syrian Army that had taken up arms against President Bashar al-Assad.

It was the first rebel group to receive U.S.-made TOW anti-tank missiles from Western backers in April.

In recent months it had been coming under increasing pressure from jihadist fighters including from Syrian al-Qaida affiliate the Al-Nusra Front, which has dislodged Hazm from several areas.

On Saturday, Nusra launched a major assault on Hazm's main operations center -- Base 46 in Aleppo province -- which members of the group had seized from troops loyal to Assad in November 2012.

In one night alone, he said, 73 Hazm fighters were killed.

Nusra overran the base and, according to the Syrian Observatory for Human Rights monitoring group, seized as many as 80 of the TOW missiles. Images circulated on social media showed Nusra fighters proudly brandishing their new weapons.

The next day, a statement from Hazm announced it was disbanding.

AFP could not independently confirm the statement's authenticity but several fighters from the movement said via social media that they would be joining the Shamiyah Front, a large coalition of Sunni Islamist groups in Aleppo province.

"The collapse and self-dissolution of the Western-backed Harakat Hazm group... is a dramatic end to a group openly supported -- to some degree -- with Western military supplies and training," The Soufan Group said.

Washington downplayed the incident, with a U.S. military official telling AFP that Hazm's apparent disbanding was a reminder "that Syria is a fluid battlefield".

The official said the United States was resolved to its effort with moderate rebels, which aims to train about 5,000 Syrian fighters this year and roughly 15,000 over three years.

The United States is fully aware that "there will be losses of equipment and personnel," the official said, adding that former Hazm members would be recruited for the programme, which is set to start in four to six weeks in Turkey.

"It's a cautionary tale for all sides," said Jeffrey White, defense fellow at the Washington Institute for Near East Policy, a think tank in the U.S. capital.

White said that both sides of the program will be spooked by Hazm's disintegration and the snatching of its weapons by Nusra.

"It demonstrates for the U.S. the risk of backing any one of these major groups" out of fear that distributed weapons will get into the hands of jihadists, White said.

And for the fighters themselves, he said, there will also be anxiety about receiving U.S. support.

"People who might go into that (program) will look at the case of the SRF and Hazm and say: 'Wait a minute, are these guys really going to stick with us, or will they expose us to retribution inside Syria?'" White said.

Sure U.S give more weapons to the so called moderates, let it be taken by Nusra & ISIS later. Good business right

"Washington Institute for Near East Policy"
This is an affiliate of the Israel government. Israel likes a little bit of chaos in its neighborhood, but not too much. That could lead to self-government, the opposite of racism.

Every report has concluded the so called rebels have integrated with Isis-Nusra-Qaida etc, yet the same silly reports keep on coming.

You're the man who signs in & out all day..one guest name after the other...why don;t you bring him back.

Keep up the good work ..Naharnet commendation awaits you.

The West, except Obama, has reached the conclusion that All Muslims support ISIS / NUSRA, directly or indirectly.
The editorial highlights the use of deception by Muslims: Divide Muslims into moderates and extremist Jihadis. Muslims, moderates and extremists, have been taught since infancy about the Kuffar and about Jihad to subdue them. Saudi Arabia and Iran have included these notions in their official curriculum for decades.
Officially, Muslims keep announcing they can tolerate other religions in the Middle East.
Naharnet: Freedom of the Press is what keeps you in business