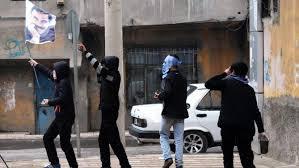 A Turkish court on Thursday sentenced a man to 13 years and nine months in prison for climbing up a flagpole and lowering the Turkish flag last year in the Kurdish-majority southeast, local media reported.

The private Dogan news agency reported his conviction and sentencing by a court in the southeastern city of Diyarbakir.

Pictures had shown the man -- who covered his face so as not to be identified -- climbing a pole and downing the flag at a military air base in Diyarbakir in 2014.

The incident came shortly after two Kurdish protesters were killed in clashes with Turkish security forces in the Lice district of Diyarbakir.

In his testimony reported by local media, Mutlu said he was saddened by the deaths and decided to lower the flag in protest because "I couldn't control my nerves."

President Recep Tayyip Erdogan, who was then prime minister, had vowed that the man would pay a price.

The removal of the flag stoked anti-Kurdish sentiments in a country which sees any attack to national symbols as an insult.

Burning, tearing or pulling down the Turkish star-and-crescent flag are strictly illegal in Turkey and punishable with hefty jail sentences.