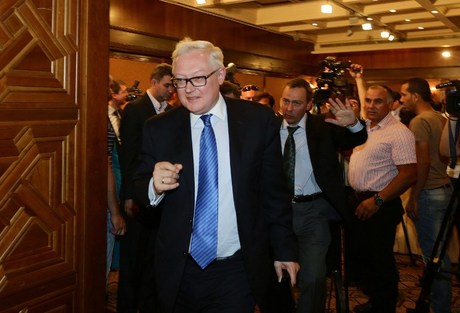 "The Russian Federation and Rosatom are ready to supply new fuel and process irradiated fuel in existing reactors, and those Iran will be building," said Russian Deputy Foreign Minister Sergei Ryabkov according to Russia's Interfax press agency.

Ryabkov that added the offer applied "to reactors constructed in Iran with a Russian project involving Russian participation."

"The question remains very difficult for other reactors (whose construction) Russia was not involved in, and we are not ready to provide our position on it."

Last November Moscow concluded accords with Iran to build two new reactors at its Bushehr plant -- which was officially delivered to Tehran in 2013 -- and signed protocols to construct an additional four reactors on other sites.

Despite questions still hovering over that issue and several others in the framework accord concluded Thursday, Ryabkov hailed the accomplishment of hammering out agreements on most aspects of the deal to limit Iran's nuclear program to strictly civil purposes.

"We can be proud of ourselves," he said, urging that between now and the final accord due by July, economic sanctions against Iran should be lifted "immediately."

The agreement marked a major breakthrough in a 12-year standoff between Iran and the West -- which has long feared Tehran wants to build a nuclear bomb -- and raised hopes the deal could help stability in the Middle East.

Under the deal Iran's stocks of highly enriched uranium will be cut by 98 percent for 15 years, while its unfinished Arak reactor will not produce weapons-grade plutonium.

It will also commit Iran to reducing by roughly two-thirds -- to 6,104 from around 19,000 -- the number of uranium centrifuges, which can make fuel for nuclear power but also the core of a nuclear bomb.