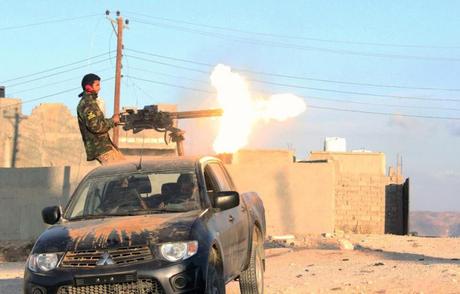 Clashes between Libyan government forces and Islamist-backed militiamen on Friday killed four militants, a security source said, and one person died in a mortar attack on Tripoli's only functioning airport.

The fighting broke out when armed men launched an assault on the edges of Aziziya, a town just 35 kilometers (22 miles) south of Tripoli, the source said.

Four people were killed and 11 wounded, the source told AFP.

Fajr Libya is an alliance of militias, including Islamists, who have installed a government in Tripoli opposed to the internationally recognized legislature and cabinet based in the east.

The recognized government said two weeks ago that loyalist forces had launched an offensive to "liberate" Tripoli and its suburbs, and Fajr Libya reported that a group of gunmen had infiltrated Aziziya.

As Friday's fighting began, Tripoli's Mitiga airport was hit by a mortar round that killed an airport employee, a source there told AFP, adding that it was not known who fired the round.

"The mortar... struck a bus transporting three airport employees, killing one and wounding another," the source said, adding that an aircraft carrying medical equipment that was parked on the apron at the time was spared.

Mitiga is a military airfield now used by civilian traffic also after Tripoli's international airport was seriously damaged in last summer's battle for control of the capital.

It is the only airport still functioning in the city and falls under the jurisdiction of the government installed by Fajr Libya last year.

Also on Friday, the Islamic State group claimed it was behind bomb and mortar attacks on Fajr Libya south of the central city of Sirte on the coast.

The claim came as Battalion 166, part of the Fajr Libya alliance, said its forces had killed six IS members southeast of Sirte after two of its men were wounded by mines planted by the jihadists in the area.

Libya has been mired in violence since the 2011 uprising that toppled and killed strongman Moammar Gadhafi, with rival militias battling for the country's oil wealth and control of its cities.

IS has thrived on the chaos and gained a foothold in the North African country.