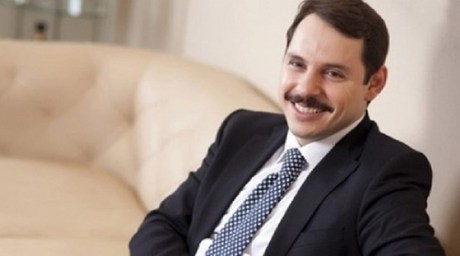 Turkey's main political parties on Tuesday submitted to the election authorities their lists of candidates for June parliamentary polls, with President Recep Tayyip Erdogan's son-in-law among those standing.

Berat Albayrak, husband of Erdogan's elder daughter Esra, is one of the candidates of the ruling Justice and Development Party (AKP) for Istanbul, the party announced.

Berat Albayrak was until late 2013 the chief executive of the Calik Holding conglomerate but has more recently been writing economic commentaries in pro-government newspapers, creating expectations he may be headed for a government post.

There had been rumors that Erdogan's younger daughter Sumeyye could herself stand for the 550-member parliament but these were previously rejected by the AKP.

The June 7 legislative elections are being seen as a key moment in modern Turkish history, with the AKP seeking a majority that would allow it to change the constitution and enshrine the powers of the president.

Erdogan, prime minister from 2003-2014 has transformed the office of the presidency since taking office in August from what was before a ceremonial role.

Among the other eye-catching candidacies for the parliament, Ekmeleddin Ihsanoglu, the former head of the Organization of Islamic Cooperation (OIC) who stood against Erdogan in the presidential polls, will be a candidate for the opposition Nationalist Movement Party (MHP).

Selina Ozuzun Dogan, a lawyer who belongs to Turkey's Armenian minority, will stand for the opposition Republican People’s Party (CHP) in an unusual move for the party seen as the standard bearer of the secular elite.

The CHP is also fielding a candidate from the Roma minority, Ozcan Purcu, in the Izmir region.

Meanwhile, a German-born Yazidi politician, Feleknas Uca, has been named by the pro-Kurdish People's Democratic Party (HDP) to stand on their list for the southeastern city of Diyarbakir.

Uca has already sat in the European Parliament as a representative of German left-wing party Die Linke.

Much in the election will depend on whether the HDP can break the 10 percent threshold required to automatically obtain seats which could destroy the AKP's hopes of winning a constitutional majority.