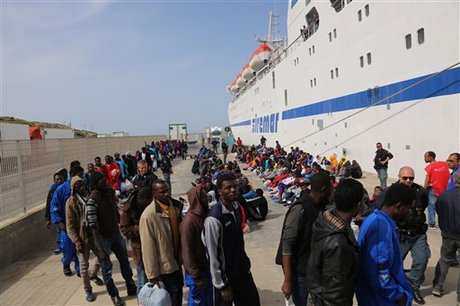 More than 11,000 migrants have been rescued from the Mediterranean and taken to Italy in the past six days, coastguards said, with hundreds more expected Friday.

As the wave of refugees trying to get to Europe grows, the Italian navy said it managed to recapture an Italian fishing trawler that had been attacked by Libyan gunmen off the chaotic war-torn country.

More than 300 migrants were rescued Friday by the Italian navy and coastguard patrols, among them 45 women and 23 children, and were being taken to the Sicilian port of Pozzallo.

Rescuers said a woman died and 16 other people were injured on another migrant boat carrying 90 people when a gas canister exploded on board. The boat was now being escorted to Lampedusa, an Italian island off Tunisia, the authorities said.

Meanwhile prosecutors in Palermo, Sicily, asked a court to remand in custody 15 migrants accused of throwing a dozen Christians into the sea who had been on a boat with them during a crossing from Libya.

Archbishop Giancarlo Perego of a Catholic organization that helps immigrants, described the killings, if proven, as "a tragedy within a tragedy", the paper said.

The increasingly violent and chaotic situation in Libya, a key jumping off point for migrants, has prompted a hike in the number of migrants trying to reach Europe.

Though many hundreds have died trying to reach Europe, rights groups say their situation is so desperate the extreme danger has not dissuaded many from attempting the crossing.

Italian media had earlier said that the trawler "Airone" had been seized by people smugglers operating off the Libyan coast.

But an Italian navy spokesman said the boat had been "kidnapped this morning by a tug that apparently belonged to the Libyan security forces, 90 kilometers (55 miles) northwest of Misrata.

"We can confirm that navy personnel... have boarded an Italian ship and have taken control," he added

The Libyan authorities frequently detain Italian trawlers they accuse of fishing illegally in their waters, but they usually let them go after negotiations.

italy needs to stop this epidemic of allowing these "people" into their societies or it is them who will be thrown off the boats, blown up on buses, etc etc. they can't live in peace in any of their homelands, what makes you think they will become domesticated in italy? they wont.