Tense Turkey Braces for May 1 Clashes 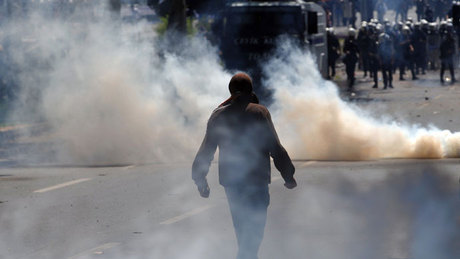 Turkey braced Thursday for a tense Labor Day, with the authorities banning May 1 demonstrations on the iconic Taksim Square in Istanbul and the prime minister warning any disorder would not be tolerated.

Labor Day has seen recurring clashes in the last years between the security forces and leftist protesters.

Authorities in Istanbul have tightened security ahead of the national holiday, with iron barricades already erected in the city center.

The governor of Istanbul Vasip Sahin said that demonstrations would not be allowed on Taksim Square as the area was "not adapted to the commemorations for May 1" and there was a risk to "security and property".

Unions and activists have made clear they still intend to take to the streets, in defiance of the restrictions.

Taksim Square has been a flashpoint for clashes on Labor Day after dozens of people were killed there on May 1, 1977 when modern Turkey was going through one of its most turbulent periods.

At least 10,000 police have been mobilized to ensure order in Istanbul while a key metro line will be partly suspended to prevent access to the square.

"There will be no compromise to anyone who wishes to exploit the memory of our citizens who died on May 1 (1977) to drive the country to chaos or who wants to create violence with Molotov cocktails," said Prime Minister Ahmet Davutoglu, quoted by Turkish media.

He warned unions and activists "not to get into the games of marginal groups and teams of provocateurs."

Some 90 people were wounded and 142 arrested in May 1 clashes in Istanbul last year, with police making liberal use of tear gas and water cannon.

The new homeland security bill contains jail sentences for protesters who carry Molotov cocktails, wear the insignia of a banned organization or conceal their face with a mask.

A heavy police deployment will also be put in place in the capital Ankara, with restrictions on public access to the city center.

The protests represented the biggest challenge yet to Erdogan's rule.