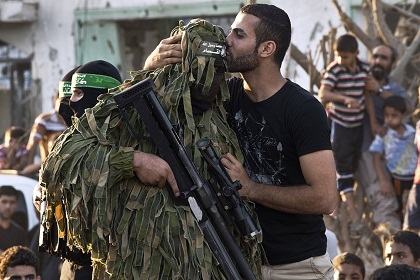 The International Criminal Court's chief prosecutor has said she is weighing opening war crimes investigations into Palestinians as well as Israelis after Palestine joined the tribunal's jurisdiction last month.

Fatou Bensouda rejected Israeli fears of bias by the court, promising to consider the evidence "independently and impartially without fear or favor," in an interview published by Israel's liberal Haaretz newspaper on Friday.

"We will of course look into the alleged crimes committed by all sides to the conflict. I have made this clear to both Israeli and Palestinian officials," she said.

Bensouda said that so far her deliberations were still at a preliminary stage and no investigation had been opened into anyone from either side.

"At this stage we are not investigating, as a decision on whether to open an investigation in the situation of Palestine has not been made," she said.

Bensouda began a preliminary examination in January of whether there was sufficient evidence to warrant opening war crimes investigations into last summer's conflict in the Gaza Strip between Israel and Palestinian Islamist movement Hamas.

A U.N. report released on Monday found Israel responsible for seven deadly strikes on U.N. schools used as shelters during the conflict, but also found that Palestinian militants had used vacant schools as weapons stores and possibly also as firing positions.

Palestine formally joined the ICC on April 1, extending its jurisdiction to the West Bank, including annexed east Jerusalem, as well as Gaza.