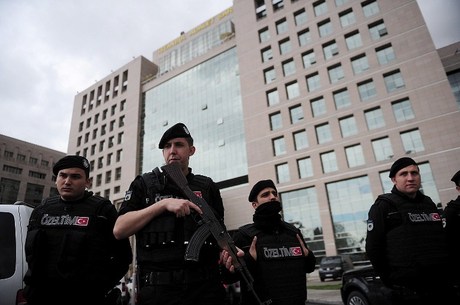 Turkey on Friday was holding in detention two judges who issued a controversial release order that would have allowed the liberation from custody of dozens of opponents of President Recep Tayyip Erdogan, the official Anatolia news agency reported.

Judges Metin Ozcelik and Mustafa Baser at the weekend issued an order to release the 74 former police and the head of the Samanyolu TV channel Hidayet Karaca from police custody.

All are accused of being allies of Erdogan's arch foe, the U.S.-based preacher Fethullah Gulen, and working with him in a parallel state aimed at overthrowing the government.

The decision had been blocked by a higher court and the judges themselves were then suspended by Turkey's Supreme Board of Judges and Prosecutors (HSYK).

An Istanbul court had Thursday issued arrest warrants for the two judges.

Ozcelik was arrested late Thursday and was remanded in custody in Silviri prison on the outskirts of Istanbul.

Baser meanwhile surrendered to the authorities at the Bakirkoy court in Istanbul on Friday morning, Anatolia said.

NTV said Baser was remanded in custody by the court after a lengthy hearing.

Both have been charged with membership of an armed group and impeding the work of the government, it added.

Gulen leads a broad movement known as "Hizmet" (Service), believed to be supported by millions of Turks and which brings together interests ranging from finance to schools to media.

The cleric, 74, was once a close ally of Erdogan. But the authorities blamed Gulen for corruption allegations that rocked Erdogan's government in December 2013 while he was prime minister.

Gulen, who left for the U.S. in 1999 to escape charges of anti-secular activities by the government at the time, has denied being behind the graft allegations against Erdogan.

The 75 suspects were never released and remain in detention.

They had all been detained in a series of raids that started last year against supporters of Gulen in the Turkish security forces.

Karaca leads a strongly pro-Gulen television channel and his arrest had been condemned by media rights groups.