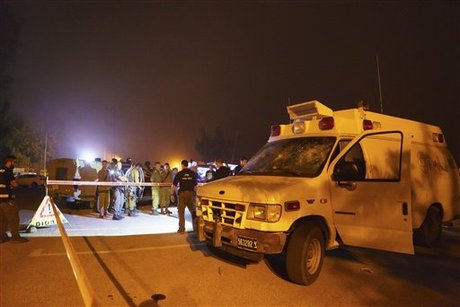 Israeli police said Wednesday they had carried out a "wave of arrests" of suspects involved in two attacks by Druze on military vehicles transporting wounded Syrians to hospital.

Israeli media said nine Druze were arrested over the attacks on Monday, when a mob killed a Syrian and wounded another in the Golan Heights and an ambulance was stoned in the Galilee town of Hurfesh.

"An extensive wave of arrests was conducted overnight of suspects involved in two incidents of attacking military ambulances near Majdal Shams in the Golan Heights and near Hurfesh," a police statement said.

Further details of the investigations into both incidents remained under a gag order.

Syria's Druze minority are traditional allies of President Bashar Assad, and the rioters on Monday probably believed the men in the ambulance were rebels fighting to unseat him.

On June 10 at least 20 Syrian Druze were reportedly killed in an unprecedented shoot-out with Al-Qaida affiliate Al-Nusra Front in northwestern Syria.

Syria has said the two men attacked in the ambulance were members of Al-Nusra Front. Israel says they were civilians.

Druze leaders have pressed Israel to take a more active role in the Syrian war, but Israeli Defense Minister Moshe Yaalon reiterated that no internal pressures or acts of violence would "drag us into a war that is not ours."

"We will continue to provide humanitarian aid to women, children and wounded people who reach the field hospital we set up along the border in the wake of the difficult situation," he said at an IT security conference in Tel Aviv.

Israel does not rule out the possibility that some of those given medical care are rebels.

Israeli Prime Minister Benjamin Netanyahu has described the Golan Heights killing as a "lynching" and was set to meet Wednesday with local Druze leaders, who roundly condemned the attack.

The Druze are a secretive offshoot of Shiite Islam. Officials say there are 110,000 of them in northern Israel and another 20,000 in the Israeli-occupied Golan.

Army spokesman Major Arye Shalicar told AFP there was "no change" in the Israeli policy of providing "humanitarian" medical care to wounded Syrians who approach the ceasefire line on the Golan Heights.

Right, they won't let palestinian mothers about to give birth get through checkpoints, sometimes causing their death in labor, but they will pick up wounded nusra terrorists from across the border and treat them.

yep, that's what the "gag order" is for.

Oh please, how many shia Syrian army soldiers as the Israel also taken for medical care? Shia blank memory all of a sudden

Oh please, how many shia Syrian army soldiers as the Israel also taken for medical care? Shia blank memory all of a sudden

Care to tell us more on that story about "shia Syrian army soldiers" taken to israel?

Can it be more clear than this? ISrael supports Al Nusra takfiris in the open.
Everybody knows this, even the takfiris.
The respectable Druze are fighting for their sects survival, while the Zionists are busy providing the takfiris protection and medical convoys.

where did you read it somewhere yesterday?

The Honorable Druze are rising up against the Al Nusra salafi and their Zionist israeli helpers that transports Al Nusra across Golan to provide them medical care.

God bless these real Druze that fights for their honor!

Ofcourse you would mention that marcus, you hold your hands over the takfiris along with Jumblat that sold his people for Saudi dollars.

The arrogance and shortsightedness of the Lebanese politicians and those credulous characters who follow them blindly have driven Lebanon into "entropy" while the people watch their future gradually decline into disorder.