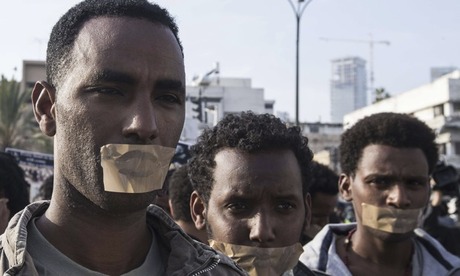 Hundreds of Eritrean asylum seekers protested in Israel Thursday to urge action against their country's regime and call for recognition as refugees.

Their demonstration came after the release of a U.N. report that provided damning details on alleged human rights abuses in the Horn of Africa nation, and with thousands of Eritreans seeking asylum in the Jewish state.

The protest occurred outside the European Union delegation's Israeli headquarters in Ramat Gan, a suburb of commercial capital Tel Aviv. Police blocked off the area outside the building.

Several hundred people protested peacefully in support of the U.N. report, and urged European states and Israel to grant refugee status to Eritreans fleeing their regime.

"Eritrea: ruled by fear, not law," read one banner, as protesters waved Israeli and Eritrean flags.

"In memorial of those who have been beheaded and who have drowned," read another. That was a reference to the killing of nearly 30 east Africans by Islamists in Libya earlier this year, and the drowning of some 800 migrants in the Mediterranean in April.

"Eritreans don't flee their home and their country because they want a better job, or a car, or a plasma TV. We flee our homes because we... are born to be free and live in dignity and safety," a statement from the organizers said.

On Wednesday, a U.N. expert called for a probe into whether the Eritrean government should face justice for alleged crimes against humanity following the damning report.

The nearly 500-page report, released after a year of investigations, details how Eritrea, under Isaias Afwerki's iron-fisted regime for the past 22 years, has created a repressive system in which people are routinely arrested at whim, detained, tortured, killed or go missing.

It said violations were taking place on a "scope and scale seldom witnessed elsewhere."

Tens of thousands of Eritreans and Sudanese have sought asylum in Israel over the past few years.

Of an estimated 30,000 Eritreans who have arrived, only four have been given official refugee status, according to rights groups.

More than 2,000 African migrants, referred to as "infiltrators" by Israel's government, are housed in a sprawling detention center in the southern Negev desert, where they face transfer to a nearby prison complex or "voluntary" departure, often to Rwanda or Uganda.

The issue caught the media spotlight in April, when three African Christians executed by Islamists in Libya after seeking passage to Europe were identified as having sought asylum in Israel.