U.N. Orders Probe of Alleged 'Crimes against Humanity' in Eritrea 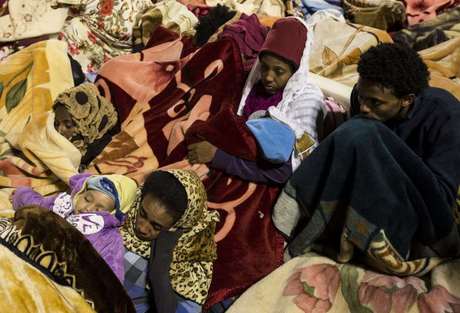 The U.N. Human Rights Council on Thursday decided to prolong an investigation into horrendous abuses in Eritrea, and widen it to include looking into suspected crimes against humanity.

The 47-member rights body unanimously agreed to extend for another year the work of a special commission of inquiry on the human rights situation in the autocratic Horn of Africa state.

The commission should "investigate systematic, widespread and gross violations of human rights in Eritrea with a view of ensuring full accountability, including where these violations may amount to crimes against humanity," the resolution said.

The three-member team last month published a 500-page report detailing how Eritrea, under Isaias Afwerki's iron-fisted regime for the past 22 years, has created a repressive system in which people are routinely arrested at whim, detained, tortured, killed or go missing.

A system of indefinite conscription of all Eritreans also forces many to toil in slave-like conditions in the military and other state jobs, sometimes for decades, according to the report, which was flatly rejected by Eritrea.

The investigators said violations were taking place on a "scope and scale seldom witnessed elsewhere."

The report found that some of the numerous abuses committed in Eritrea "may constitute crimes against humanity," but the investigators said they had not probed that possibility, since it was not in their initial mandate.

"We didn't have the time, the resources (or) the possibility to be able to make any determination on (crimes against humanity) and we simply recommended that some mechanism could be judged to look at that issue," head of the commission Mike Smith told reporters last month.

The report provides a list of government and state entities responsible for the abuse, including the military, police, justice ministry and Isaias himself.

Thursday's resolution, which was tabled by Djibouti and Somalia, strongly condemned "the systematic, widespread and gross human rights violations that have been and are being committed by the government of Eritrea in a climate of generalized impunity."

It also lamented that the abuses were inciting "an ever-increasing number of Eritreans to leave their country."

Eritrea, which after Syria is the largest source of migrants risking their lives to cross the Mediterranean to Europe, is seeing some 5,000 people flood out of the country each month, despite a "shoot-to-kill" policy along the borders.

Thursday's text urged Eritrea to among other things release all political prisoners, halt the use of torture, end the system of indefinite national service and "end the practice of shooting at Eritrean citizens attempting to cross the border."

And it demanded that the country cooperate with the investigators, who have not been permitted to enter and who have so far mainly based their findings on interviews with Eritreans living abroad.

The resolution also said all the commission's findings should be passed on to U.N. chief Ban Ki-moon and the General Assembly in New York "for appropriate action."