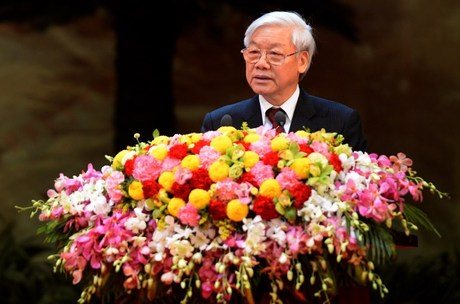 The head of Vietnam's Communist Party will make a first-ever visit to the White House next week, meeting President Barack Obama on the 40th anniversary of the end of the war between the two nations.

Nguyen Phu Trong will become the first General Secretary of the Vietnamese Communist Party to visit the United States and the White House, diplomats and officials said.

Obama and Trong will hold talks Tuesday and discuss ways to improve ties that were normalized 20 years ago, the White House said Friday.

Trong -- who heads the ruling party but has no formal government position -- will be hosted in the Oval Office, an administration official said.

That is an uncommon honor for someone who is not the head of state or government.

"The president also welcomes the opportunity to discuss other issues, including the Trans-Pacific Partnership, human rights, and bilateral defense cooperation," the White House said in a statement.

Vietnam is eager to attract investment and is part of ongoing negotiations over the proposed Trans-Pacific Partnership, an American-led trade deal among a dozen Pacific nations.

The visit "is essential for Vietnam to project the image of closer ties with the U.S.," Thanh said, but warned Hanoi should be careful of China's reaction.

"To live next door to a tiger is a very delicate situation," he added.

The TPP is a major Pacific regional trade accord being negotiated among 12 countries that do not include China. It is, in fact, meant to offset the growing economic might of China.

It has been 40 years since Viet Cong fighters and the North Vietnamese army won control of South Vietnam, humiliating the world's pre-eminent superpower and ending a war that defined both nations.

Trong is getting VIP treatment even though he has no government role. He is the authoritarian country's most senior politician, although not the most powerful.

"He is the senior person in the Vietnamese leadership, and there was broad agreement that it made sense to treat the visit as a visit from the top leader of the country," a senior State Department official said.

"It's not a typical meeting for the president, certainly."

Josh Kurlantzick of the Council on Foreign Relations called the visit "significant," telling AFP: "It adds to the growing closeness between the U.S. and Vietnam."

This year also marks the 20th anniversary of the re-establishment of diplomatic ties after a 19-year war that left a still unknown number of dead.

Beijing's more assertive stance on territorial claims in the South China Sea -- including deploying military equipment to the disputed Spratly Islands, claimed in part by Vietnam -- has only deepened the belief that Washington and Hanoi must work together.

The State Department official said the visit would seek to "add momentum in the relationship."

Trade, as well as the territorial dispute in the South China Sea, will be on the agenda, along with the thorny issue of human rights, the official said.

Vietnam is looking for a full lifting of the U.S. ban on weapons sales, and is hoping to purchase surveillance equipment and patrol boats to help defend its waters.

Vietnamese military spending has increased dramatically in the last decade, by 130 percent since 2005, according to the Stockholm International Peace Research Institute.

But current U.S. laws bar the sale of lethal weapons to Hanoi, and there are concerns in Congress that arms could be used to trample human rights.