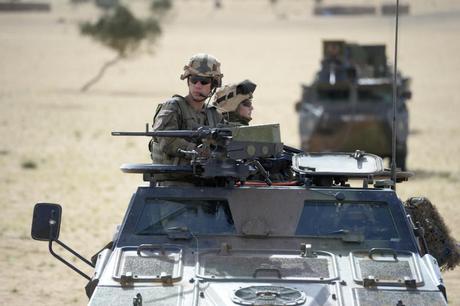 France said on Tuesday its special forces in Mali killed an Al-Qaida commander who had been released from prison in a swap for a French hostage.

The army said Ali Ag Wadossene, one of the "operational leaders" of Al-Qaida in the Islamic Maghreb (AQIM), died on Sunday in the northeastern town of Kidal, while two other "terrorists" were captured.

The operation "has dealt another heavy blow to armed terrorist groups in the Sahel", the army said, adding that it had destabilized AQIM's chain of command in that part of the lawless, arid region.

The raid, by France's Operation Barkhane counter-terrorism mission, came days after six peacekeepers from Burkina Faso were killed in an attack claimed by AQIM, one of the deadliest ever against the U.N. force in Mali.

Two special forces soldiers were wounded in Sunday's operation in the troubled west African nation's desert, where France has had troops since it launched an operation in 2013 to oust Islamists who had seized northern Mali.

While never confirmed by France, Mali admitted in December that four prisoners including Ag Wadossene were released in exchange for the freedom of Frenchman Serge Lazarevic, who spent three years in the hands of Islamist militants.

Ag Wadossene was one of the instigators of the 2011 kidnapping of Lazarevic and fellow Frenchman Philippe Verdon, who was found shot dead in 2013.

Lazarevic was the last of more than a dozen French citizens taken captive in recent years, with those held in Africa reaching a high of 15 last year.

Amada Ag Hama, known as "Abdelkrim the Tuareg", who claimed the kidnapping and murder of French journalists Ghislaine Dupont and Claude Verlon in Mali in 2013, was one of two commanders killed in a raid in northern Mali in May.

He was a leader of an AQIM battalion and a former lieutenant of Abdelhamid Abou Zeid, one of the group's leaders killed fighting the French army in northern Mali in February 2013.

Sunday's operation came a day after Dupont's mother, Marie-Solange Poinsot, accused France of withholding information over her daughter's murder in an open letter to President Francois Hollande published by the regional press.

"This persistent silence is intolerable for me, or even suspect, and forces me to make public my request," she wrote, calling for clarity over the links between the "successive elimination" of jihadists and her daughter's death.

Mali was shaken by a coup in 2012 which cleared the way for Tuareg separatists to seize the towns and cities of the vast northern desert.

Militants linked to Al-Qaida then overpowered the Tuareg to take control of northern Mali for nearly 10 months, imposing a brutal interpretation of Islamic law with punitive amputations and executions.

A French-led military offensive ousted the militants but the country remains deeply divided, with the Tuareg and Arab populations of the north accusing sub-Saharan ethnic groups in the more prosperous south of marginalizing them.

The government, loyalist militias and the main Tuareg-led rebel alliance have signed a peace accord concluded in June but Islamist groups were excluded from the process.

An 11,000-strong U.N. peacekeeping force has also been present in Mali since July 2013 to oversee the stabilization of the country.

AQIM released footage in June of a jihadist with an English accent parading two Western hostages he said were being held in "new territory" under the group's control.

South African Stephen Malcolm McGowan and Swede Johan Gustafson were abducted in Timbuktu, northern Mali, in November 2011 and have been held since by AQIM.

The jihadist claims seven AQIM fighters were released as part of the exchange for Lazarevic.