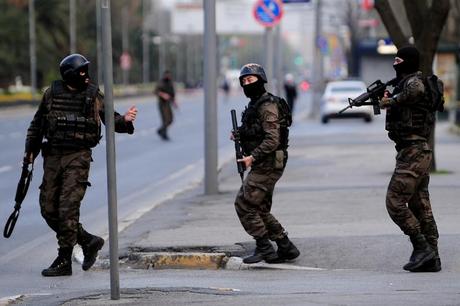 Turkey on Friday detained 21 suspected members of the Islamic State group, including three foreigners, in a major operation in several cities including Istanbul, state media said.

Police detained the suspects in pre-dawn raids in several addresses in Istanbul, as well as Sanliurfa province near the Syrian border, southern Mersin province and Kocaeli province east of Istanbul.

The detainees are suspected of helping the jihadist group recruit people from Europe as well as helping them travel to Syria, the official Anatolia news agency said.

The foreigners, whose nationalities were not immediately clear, were planning to cross into Syria to fight for IS, which follows a fundamentalist version of Islam.

The operation appeared to be the largest one yet targeting IS suspects in Turkey, with arrests in the megacity Istanbul for the first time.

Video footage showed bearded suspects with their right index finger pointing upward -- a gesture used by IS members referring to the unity of God -- as they were being led away by plain clothes police officers.

Asked by a reporter why they thought they were being detained, one suspect said: "Because you are kuffars (the infidel) targeting Muslims."

Western states have repeatedly accused Turkey of not doing enough to halt the flow of jihadists across its 911-kilometer (566-mile) border with Syria.

Turkey fiercely rejects the accusations, saying it is making every effort to secure a long border and in turn has accused the West of not playing its part to shoulder the burden of hosting 1.8 million refugees from Syria.

In an apparent bid to deflect the criticism, Turkish authorities have arrested a number of suspected militants in recent months.

President Recep Tayyip Erdogan said on Thursday Turkey has so far arrested and deported around 1,300 people linked to the IS or other jihadist organizations operating in Syria.

"But other countries should do their part to prevent the terrorists from traveling (to Syria) in the first place so that the fight against terrorism will be won," he said.

Last week, Turkish counter-terrorism police arrested seven men in the western port city of Izmir suspected of fighting alongside the IS in Syria.

Friday's arrests came after a two-day visit this week by a senior U.S. delegation during which Turkey pledged more cooperation in the fight against the IS jihadists in Syria.

Turkey has reinforced its military presence on the volatile border over the past week, deploying tanks and anti-aircraft missiles there as well as additional troops.

The Turkish build-up has led to speculation that the government is planning to intervene in Syria to push the jihadists back from the border and halt the advance of Kurdish forces who have made gains against the extremists in the area.

Prime Minister Ahmet Davutoglu on Friday ruled out any prospect of an immediate intervention in Syria, but said Turkey would respond if its security was threatened.