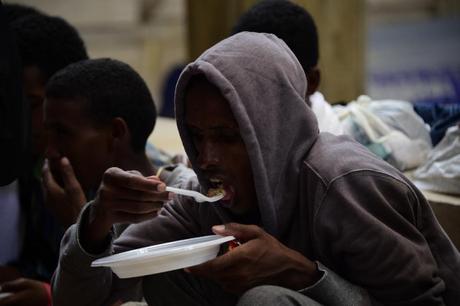 Eritrea on Saturday called on the United Nations to investigate the "abhorrent" flood of refugees from its borders to Europe, an exodus attributed to gross human rights violations in the hermit state.

A U.N. report last month detailed how the Horn of Africa nation, under Isaias Afwerki's iron-fisted regime for the past 22 years, has created a repressive system in which people are routinely arrested on a whim, detained, tortured, killed or disappeared.

Eritreans make up the second-largest number of people risking the dangerous crossing of the Mediterranean Sea, after Syrians, running the gauntlet of ruthless people smugglers and dangerous waters in the hope of reaching the European Union.

"The loss of life, deprivation and lost opportunities meted out to the victims of human trafficking is too abhorrent to merit elaboration," the foreign ministry said in a statement released Saturday.

"The government of Eritrea calls on the U.N. Security Council (notwithstanding the fact of the involvement of some of its members in the crime) to investigate the matter and ensure justice."

Tens of thousands of young Eritreans brave razor wire, minefields and armed border guards to sneak out of the country every year in order to escape repression and avoid conscripted military service that goes on for years.

It is a crisis Eritrea has in the past blamed on a CIA conspiracy and human rights activists.

Eritrea has dismissed the U.N. report and defended its controversial policy of decades-long national service from which about 5,000 people flee each month, saying it has "no other choice" due to threats from long-standing enemy Ethiopia.

Eritrea, which broke away from Ethiopia in 1991 after a brutal 30-year independence struggle, remains in a tense standoff with arch-foe Addis Ababa after a 1998-2000 border war.

"This organized crime has assumed dimensions and tentacles that transcend its 'normal' facade of a mafia enterprise," the ministry added, calling smuggling "big business".

The government, which has gathered what it calls "indisputable evidence" on people smuggling, said it will "be ready to submit its evidences once a credible process is launched."

More than 1,900 migrants have died this year making the perilous journey across the Mediterranean to Europe, out of around 150,000 people who have made the crossing, the International Organization for Migration said earlier this month.