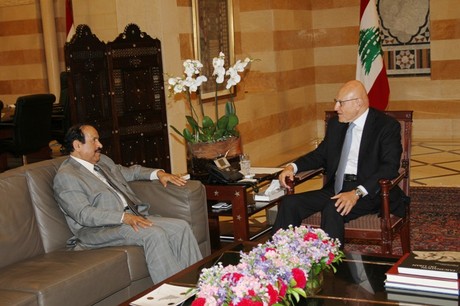 Saudi Ambassador to Lebanon Ali Awadh Asiri has said he informed Prime Minister Tammam Salam that Riyadh is keen on Lebanon's constitutional institutions after reports that the PM was mulling to resign.

In remarks to al-Joumhouria daily published Wednesday, Asiri said: “I stressed to him (Salam) that the Kingdom is keen on the continued functioning of state institutions, chiefly the premiership.”

The diplomat visited Salam at the Grand Serail on Tuesday.

He expressed hope that all political parties would cooperate to resolve issues wisely.

Asiri said he wanted to “see positive results that serve Lebanon’s interest and its stability.”

Lebanon’s political crisis, which erupted after the end of the term of President Michel Suleiman in May last year, worsened earlier this month after the Free Patriotic Movement called for changing the cabinet's decision-making mechanism.

The mechanism was adopted after the government assumed the responsibilities of the head of state in his absence.

The cabinet crisis was coupled with a waste management problem that erupted on July 17 following the closure of the landfill that lies in the town of Naameh south of Beirut.

The deadlock caused Salam to mull a resignation. He postponed a cabinet session to Thursday to pave way for more consultations after coming under pressure by Speaker Nabih Berri and Progressive Socialist Party leader MP Walid Jumblat.

Umm could we use some Saudi desert space for our garbage, please?

asiri calling the shots in lebanon... how shameful.

Tric I'm Lebanese christian , and as i read your comment i realize how stupid you are , , why don't you look objectively on who is obstructing the election of president , ,while the madman of Rabiah keep saying that he is protracting our rights as Christians well all he has to do is go to parliament and vote for president that will solve a lo of issues and he won't be able to use his protection alibi as a crutch anymore , we the Christians are our own enemies for allowing an idiot like aoun to speak for us when in reality his only serving his own interests