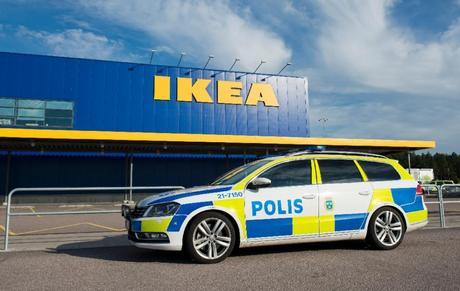 The motive for the midday attack on Monday in the central town of Vasteras was still unknown, deputy prosecutor general Eva Moren told reporters.

"The two suspects are both from Eritrea. They have been living at an asylum center," she said, adding that the pair knew each other.

"We know nothing about the motive yet, the investigation will have to determine that," Moren said.

The suspects' identities were not disclosed.

The two shoppers killed were a 55-year-old woman and her 28-year-old son, both from the northern Swedish town of Skelleftea, Moren said.

One of the suspects, aged 23, has denied any involvement in the attacks.

The other suspect, born in 1979, remained in hospital in critical condition and underwent a second operation on Tuesday for stab wounds.

Police have not disclosed how he sustained his injuries.

"He was stable overnight but he is still in critical condition," Eva Lindahl, a spokeswoman for the regional healthcare authority, told AFP.

He has not yet been interrogated by police, Moren said.

The two suspects were arrested on Monday shortly after the attack. The 23-year-old was wrestled to the ground by police at a bus stop outside Ikea, while the other was found with stab wounds inside the store.

Police remained tight-lipped about the investigation on Tuesday.

There were however no indications it was terror-related and Swedish intelligence agency Sapo said it had not been called in on the case.

And Vasteras police chief Per Agren told reporters there were "no political overtones".

Moren said police had uncovered "no connection between the suspects and the victims".

Police investigators have recovered the suspected murder weapons from the scene, but Moren would not specify how many.

"Knives have been found at the scene," she said.

According to police sources quoted by regional daily VLT, "the suspects appear to have used knives from Ikea's shelves".

Moren said she would soon be reviewing video footage from the store's many surveillance cameras and reading the witness accounts of the incident to get a clearer picture of what happened.

"The store was busy, there was a large number of people in the store," Agren said.

The store, located in Vasteras about 100 kilometers (60 miles) from Stockholm, was evacuated after the attack and remained closed Tuesday until further notice.

Police meanwhile increased security at asylum centers across Sweden, presumably for fear of reprisals, including at the center where the two suspects resided in Arboga, some 50 kilometers from Vasteras.

With no known motive to explain the attacks, Swedish media speculated that the suspects, like many other asylum seekers and refugees, may have had psychological problems.

"In recent years, many refugees have come to Sweden from war-torn countries where they may have experienced serious violence and they may suffer from severe psychological trauma," Swedish news agency TT wrote.

In the first seven months of 2015, 4,257 Eritreans applied for asylum in Sweden, making it the second-biggest group of asylum seekers behind the 9,932 Syrians.

Monday's attack was in some ways reminiscent of the fatal 2003 stabbing of Swedish foreign minister Anna Lindh.

Mijailo Mijailovic, a then 24-year-old Serbian Swede with a history of psychiatric problems, stabbed Lindh, 46, repeatedly as she shopped at Stockholm's upscale NK department store without a bodyguard.