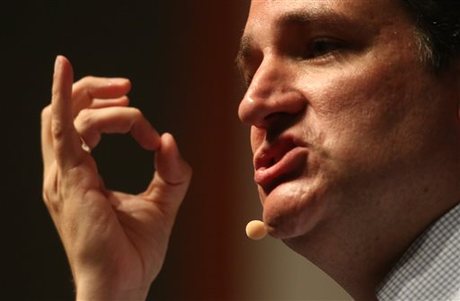 Once thought dead and buried on the battlefields of Iraq, a muscular and militaristic "neoconservative" approach to U.S. foreign policy is making a comeback.

For most of the last decade, the "neocons" -- personified by former vice president Dick Cheney and ex-Pentagon boss Donald Rumsfeld -- have been out of office and out of fashion.

But the 2016 presidential race has seen Republican candidates embrace ideas and advisors once ostracized for the catastrophes and hubris of George W. Bush's "preemptive war" in Iraq.

During last week's Republican presidential debates, 17 candidates tripped over themselves to declare President Barack Obama weak and to vow a more robust approach to foreign policy.

What Obama aides see as caution, pragmatism and a realism about U.S. power, Republicans painted as a lack of American leadership that had left a power vacuum allowing Russia, Iran, China and jihadist terror groups to run riot.

"We need a new commander in chief that will stand up to our enemies," said one White House hopeful, Senator Ted Cruz.

Seeking to sweep aside the anti-war mood that ushered Obama to the White House, Senator Lindsey Graham insisted U.S. troops are needed in Iraq and Syria to fight the Islamic State group.

If the rhetoric sounds familiar, so do some of the faces.

Paul Wolfowitz, an early and vociferous champion of invading Iraq as a senior aide to Rumsfeld, has been advising former governor Jeb Bush.

In 2012, Fly and a co-author argued that the United States should pursue a policy of regime change in Iran, with an extended bombing campaign against government targets.

It was always likely that Republican candidates would look to personnel from the two previous Bush administrations for foreign policy experience.

Washington's highly politicized civil service means that for the last seven years many have been parked at think thanks and in the private sector waiting eagerly to get back into the game.

But some Republicans see more systemic reasons for reaching back into the past.

Lawrence Wilkerson, a Republican who went toe-to-toe with neocons as chief of staff to Colin Powell during the Bush administration, believes party politics and an unwillingness to accept a relative decline of U.S. power has led to candidates' embrace of neocon ideas.

"They find there is no possibility of them winning the White House without the 11 to 12 percent of America that is certifiably nuts," he said, pointing to the extreme religious conservative voters who candidates need to court in order to win the nomination.

"The Republicans need their vote, and they vote," he told AFP. "They also hate the president's guts. Some of them are just blind racists."

But a lot comes down to a view of U.S. power and how it should be used.

He said the Republican candidates were eager to tell voters: "We're the indispensable nation, we're the exceptional nation, we've got to get back up to the top."

They forget George W. Bush and Cheney's role in America's decline and say: "Oh, by the way, the guy in the White House who happens to be black did the most to accelerate this."

"You put this all in a stew pot and put it on a low simmer on the stove and sit it a little bit and you get some really strange comments coming out of otherwise sane people," Wilkerson added.

He believes that in office the likes of Jeb Bush or Rubio would likely not enact much of their current rhetoric.

"Once these guys and gals hit reality, get their first briefing and are ensconced in the Oval Office I think, I hope, responsible leadership will return," he said.

"But you sure can't tell that from the process leading to it."

For their part, neoconservatives point to the rise of the Islamic State group and crises ranging from Libya to Ukraine to the Spratly Islands as evidence a change of doctrine is needed.

"The treatment of foreign policy as an exercise in ad-hoc crisis management has characterized Obama's entire presidency," the Foreign Policy Research Institute's Mark Moyar wrote in a recent blog post.

"Obama's remaining months in office will give America's enemies time and space to accumulate strength.

"The continuance of passivity and tokenism may even invite audacious provocations from enemies seeking to steal more sheep before a more vigilant shepherd comes along."

Obama's remaining months in office and the campaign to succeed him also look set to provide a new platform for tough-talking neocons.