Diplomats Urge Salam not to Resign over Garbage Crisis 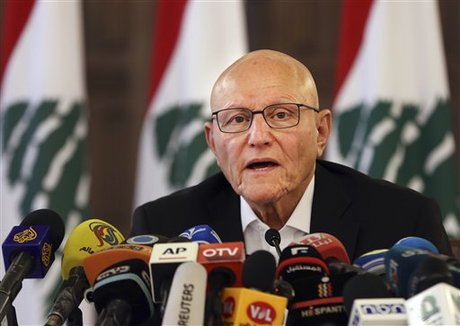 Top diplomats have contacted Prime Minister Tammam Salam to stop him from announcing his resignation over the country's waste management crisis which spiraled out of control over the weekend.

Ministerial sources told An Nahar daily published Monday that Salam has received phone calls from the ambassadors of major powers, Arab countries and the European Union in an attempt to convince him not to resign.

Salam hinted on Sunday he might step down following violent protests over the weekend against government corruption and the ongoing trash crisis.

He said in a news conference that if this Thursday's cabinet session is not productive, "then there is no need for the council of ministers."

The diplomats urged the premier to remain steadfast and confront the latest developments over fears that Lebanon would fall in total chaos, said the sources.

According to An Nahar, U.S. officials have also contacted Iran to preserve stability in Lebanon.

The diplomats warned that any party resigning from the government would be held responsible for the repercussions of its move.

Political disputes have kept the country without a president since May 2014. Parliament has extended its own term and has not convened since November because lawmakers differ on whether they can continue working before voting for a president.

That deadlock led to the trash crisis, which erupted following the closure of the Naameh landfill south of Beirut last month.

Of course PM Salam should not resign. He is a good man.

no we do not want him or his government to stay. he should schedule parliamentary elections using a new law within the coming month and then go for new parliament and government and president.

The diplomats urged the premier to remain steadfast and confront the latest developments over fears that Lebanon would fall in total chaos, said the sources.

... and total chaos is what the sick man in rabyieh and the terrorist in dahieh want.