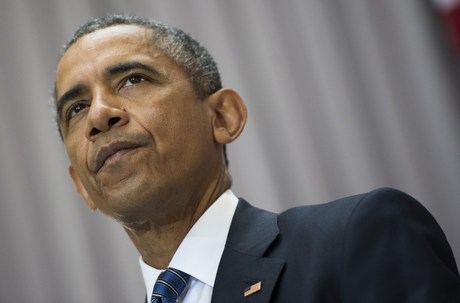 U.S. President Barack Obama vowed Monday to push for police officer safety after a Texas sheriff's deputy was gunned down from behind and shot multiple times at close range.

Darren Goforth, 47, was killed late Friday in the Houston area, and local officials have blamed ramped-up rhetoric against police officers in the United States in protests against perceived police brutality.

The veteran law enforcement officer "was contemptibly shot and killed over the weekend," Obama said in a statement after he spoke by telephone with the deputy sheriff's widow Kathleen Goforth.

The president said he offered his condolences to the widow. Goforth, a white, 10-year veteran of the force, also left behind two children.

"I also promised that I would continue to highlight the uncommon bravery that police officers show in our communities every single day," Obama added.

"They put their lives on the line for our safety."

Shannon Miles, a 30-year-old black man with a long criminal history, has been charged with capital murder.

"We've got to be able to put ourselves in the shoes of the wife who won't rest until the police officer she married walks through the door at the end of his shift.

"That comfort has been taken from Mrs. Goforth. So we must offer her our comfort -- and continue to stand up for the safety of police officers wherever they serve."

The shooting came amid a wave of protests against a string of killings of unarmed black men by police officers, most of them white.

Starting with the gunning down of 18-year-old Michael Brown in Missouri one year ago, demonstrations around the United States have condemned law enforcement's use of deadly force and called for reform of the nation's police departments.

The protests that kicked off in Ferguson renewed a debate on race and policing in America and led to reform efforts leading all the way to the White House.

But the focus on condemning cops also caused police forces to say they were being unfairly targeted, increasing their risk in an already dangerous field.