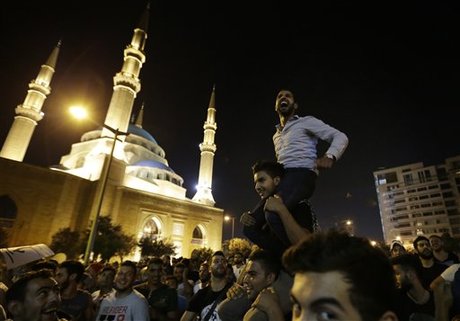 General Security said on Tuesday that it has arrested five Lebanese on suspicion of belonging to the Islamic State extremist group for the purpose of carrying out bombings and tasking thugs with causing riots during the latest protests held in downtown Beirut.

A communique issued by the agency said the five Lebanese have set up a terrorist network that plotted blasts to target bases and vehicles belonging to the Lebanese army and security forces.

The suspects have also tasked a group of men to cause riots during the protests organized by civil society activists in the past weeks over the waste crisis and their demands to resolve rampant corruption, said the communique.

The thugs have cursed officials and sprayed abusive and offensive writings on the grave of ex-PM Rafik Hariri at Mohammed al-Amin mosque for the purpose of causing sectarian strife, General Security said.

Following the questioning of the suspects, the agency referred them to the judiciary, it added.

so well said it does not even require any further comment.
Bravo

southy... it is not pajama who has sprayed "abusive and offensive writings on the grave of ex-PM Rafik Hariri"...
As for the "sectarian" word you like to use and abuse... our entire political system is sectarian.
Hezb is a sectarian militia.
The core of this country is sectarian not only in a religious way, but in an ideological way.
Unfortunately, the History of Lebanon shows us that this system does not work anymore.A President that represents a sect, a Prime Minister another, a President of the chamber another, a militia another, a chief of the Army this, a Minister of foreign affairs that, a Chief of the Police this... it's all wrong, and we're all paying a price for it...

The free sunni brigade of baalbek 2.0.. who was behind them again? Hassin, 'twas? OK I see..

texas, what good did your so called "spearheaded" broken arab offensive do in Yemen? You are still loosing Saudi soldiers everyday despite your airpower.

Syria is going great by the way, nobody wanted useless burned out Idlib to begin with, neither those desolate desert towns occupied by ISIS.

Fact is, Assad still sits at his palace in Damascus and the Ansarullah from Yemen still have their rightful presence in Sanaa.