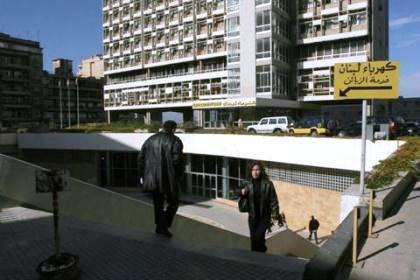 Financial Prosecutor Judge Ali Ibrahim ordered on Wednesday Electricity du Liban's general manager to cut off electricity from the homes and institutions of officials who haven't paid their bills.

Ibrahim told the head of the state-run firm, Kamal al-Hayek, that he should start implementing the decision he has taken.

The judge's bold move came at at time when anti-government activists are holding rallies stemming from a trash collection crisis.

What started as protests against waste piling in the streets of Beirut and Mount Lebanon because of government dysfunction is turning into Lebanon's largest protest movement in years, targeting an entire political class.

The protesters are not only complaining about the garbage, they are also accusing corrupt officials of being the reason behind severe power cuts and water shortages.

On Tuesday, dozens of activists held a protest outside the Finance Ministry building in Beirut, after failing to storm it.

The protesters chanted against corruption in state institutions. They asked the ministry to stop paying salaries for lawmakers who have been unable to convene.

Activists also briefly closed a main road in downtown Beirut and dumped trash outside the Environment Ministry after Minister Mohammed al-Mashnouq reiterated his rejection to resign during a meeting with hunger strikers.

Several young men went on hunger strike 15 days ago after demonstrators stormed the Environment Ministry to demand al-Mashnouq's resignation over his failure to resolve the garbage crisis that erupted after Lebanon’s main landfill in Naameh was closed mid-July.

why did the judge wait so long to order these power cuts on officials who have not paid their bills? It seems everybody now wants to look like a hero. Anyway, better late than never.

EDL and the judge should publish the names of ALL officials who do not pay their electricity bill.

EDL is a screwed up system. It is not doing its job, it is being stolen and pilfered by many, we know which areas are the biggest thieves. In the meantime people have to rely on the mafia for private electricity at sinful prices, ma kello feyet bi ba3doh, the Mazout mafia, the Moteur mafia, scratch my back and I'll scratch your back. Why should I pay to the moteur when I should be paying to the state. When the state doesn't make revenues, it goes down and the moteurs take over, and the mazout rallies in. EDL should close down or deliver as it should. Sheloh Mawarneh wou stalamo al 7awarneh.

mowaten, when will you grow up and stop trolling .... sad existence indeed!

Yeah,
but what about the ones who dont even get billed??????