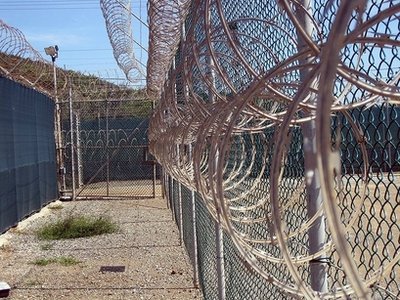 A Saudi Arabian detainee said by the U.S. military to have been a bodyguard for Osama bin Laden has been repatriated from Guantanamo Bay after more than a decade behind bars, the Pentagon said Tuesday.

Abdul Shalabi, 39, was first captured by Pakistani forces in December 2001 and was transferred to Guantanamo the following month.

But in June this year, a review panel "determined continued law of war detention of Abdul Shalabi does not remain necessary to protect against a continuing significant threat to the security of the United States," Pentagon press secretary Peter Cook said.

Shalabi, who was a long-time hunger striker, is being released as part of the Saudi government's rehabilitation program for ex-detainees and he will be monitored for years to come.

"The United States coordinated with the government of the Kingdom of Saudi Arabia to ensure this transfer took place consistent with appropriate security and humane treatment measures," Cook said.

President Barack Obama has repeatedly demanded the closure of the facility but has struggled in the face of opposition in Congress and from other countries reluctant to take in one-time terror suspects.

According to a 2008 Defense Department file on Shalabi, he was captured while attempting to cross the Afghan-Pakistan border after fleeing bin Laden's Tora Bora mountain complex.

He was captured as part of a group called the "Dirty Thirty," which included other bin Laden bodyguards, the file states.