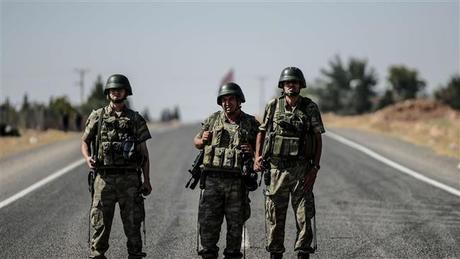 A Turkish soldier was killed in southeastern Diyarbakir province in a new attack blamed on the rebel Kurdistan Workers' Party (PKK), a security source said.

Sergeant Mehmet Ali Sarak, 25, came under fire from PKK militants with automatic rifles while on his way to his army base in the Silvan district of Diyarbakir, the source told AFP on condition of anonymity.

Sarak, who was in civilian clothing when he was shot, died instantly, said the source, who added that an security operation was then launched to track down the assailants.

In a statement published on its website, the Turkish army confirmed the death of the soldier and denounced a "despicable attack" conducted by "traitors devoid of any humanity."

Separately Turkish war planes on Wednesday carried out a new barrage of cross-border airstrikes against Kurdish militants in northern Iraq, destroying munitions depots and caves used by the PKK, the army said.

Ankara launched a major "anti-terrorist" campaign against the PKK in late July, aimed at flushing it out of its strongholds in southeastern Turkey and northern Iraq.

The group has hit back hard, killing dozens of police and soldiers in almost daily bomb and shooting attacks.

Nearly 150 soldiers and police have been killed in attacks since July blamed on the PKK compared with more than 1,000 rebels, according to pro-government media.

The escalation has shattered a two-year-ceasefire which had raised hopes of an end to the PKK's three-decade insurgency, in which more than 40,000 people have been killed.