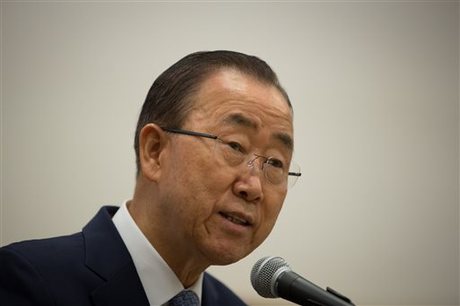 During a meeting with Iranian Foreign Minister Javad Zarif, Ban "underscored the need for Lebanon's presidential vacuum to be filled as quickly as possible," his office said on Monday.

Ban also urged Zarif to pressure its ally Syria to reach a peaceful resolution of the brutal civil war there.

Ban "reiterated that there is no military solution to the conflict and asked Iran to exercise its influence in promoting a political solution," according to a statement from his office.

The two leaders also discussed Yemen, where the U.N. is trying to revive peace talks and where Iran plays a key role through its support of Huthi rebels, who are Shiite.

Ban also called on all parties to implement "in good faith" the nuclear agreement Iran signed with major powers in July.

U.N. Deputy Secretary-General Jan Eliasson is due to visit Tehran on Sunday as part of a regional tour to discuss the humanitarian impact of conflicts in Syria and Yemen, according to spokesman Stephane Dujarric.

Eliasson will leave for Riyadh on Tuesday before heading to Abu Dhabi on Friday, Tehran on October 11, and Istanbul on October 13 for a meeting on the refugee crisis.

He will then head to Geneva on October 14 for talks ahead of a humanitarian summit set to take place in Turkey in May 2016.

but hassan nassrallah and mowaten said iran does not interfere in lebanese politics???

Demonstrating that Iran is an enemy.

UN seem to know from where the orders come from to elect a new president....