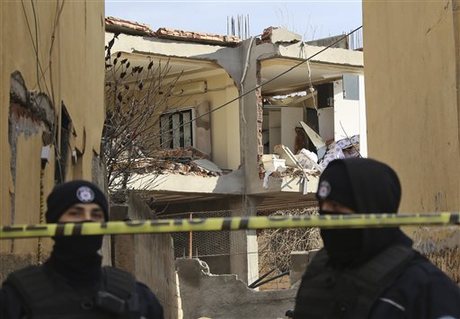 Five children were wounded on Friday when suspected militants hurled a hand-made explosive device into a schoolyard in majority-Kurdish southeast Turkey, security sources said, blaming the attack on the Kurdistan Workers Party (PKK).

The blast ripped through the yard of a secondary school in the Baglar district of Diyarbakir province where students had gathered during a classroom break, a security source told AFP.

The pupils were about to enter their classrooms to pick up their school report cards on the last day of the semester when the blast occurred, the source added.

Five were hospitalized after suffering cuts from shattered glass, but none of them was in serious condition.

President Recep Tayyip Erdogan said the violence underlined how over 1,200 academics were wrong in signing a much-debated petition condemning the military crackdown in the southeast.

"This attack is an answer to the petition," he told reporters in Istanbul.

"These so-called academics have made clear who they are siding with: They are clearly siding with those who staged this heinous attack on schoolchildren," he said.

Police detained some two dozen academics after prosecutors began an investigation into all those who had signed the petition, accusing them of engaging in "terrorist propaganda." They have all been released but remain under investigation.

The Turkish government has been waging a relentless offensive aimed at crippling the PKK, which has staged a string of attacks against security forces in Turkey since a more than two-year-long ceasefire fell apart in late July.

Vowing to flush out the PKK from Turkey's urban centers, the authorities have in recent weeks enforced curfews in three locations in the southeast to back up military operations that activists say have killed dozens of civilians.

Six people were killed, including three children, last week in a truck bomb attack that ripped through a police station and an adjacent housing complex for officers' families in the town of Cinar in Diyarbakir.

The PKK claimed responsibility Saturday for the bombing, but apologized for having killed civilians.

The PKK launched an insurgency against the Turkish state in 1984, initially fighting for Kurdish independence although it now presses more for greater autonomy and rights for the country's largest ethnic minority.