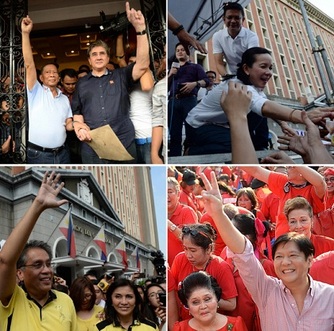 The Philippines' raucous democracy cranks into top gear this week as campaigning begins for national elections, with familiar themes of corruption, dictatorship and celebrity star-power to dominate.

The three-month campaign launches Tuesday with most interest on a crowded contest to succeed President Benigno Aquino, who has won global applause for six years of strong economic growth and a bruising anti-graft campaign.

There are myriad other sub-plots, including a bid by dead dictator Ferdinand Marcos's son to take the vice presidency and eight-time world boxing champion Manny Pacquiao's run for a Senate seat.

The jailhouse campaigns of two politicians charged with murder who are running in local mayoral elections, as well as graft-tainted ex-president Gloria Arroyo's run for a third term as congresswoman while behind bars, fuel a sizzling political atmosphere of chaos and chicanery.

There are four major contenders in the battle to move into the presidential palace and most analysts predict the deciding factors will -- as usual -- be name recognition and charisma rather than ideology or policy.

"In the Philippines, elections are like a circus with the candidates trying to attract attention with their performances," Earl Parreno, an analyst at the Manila-based Institute for Political and Economic Reform, told AFP.

"Programs and policies are secondary... it's a personality contest."

Aquino won in a landslide six years ago largely due to the popularity of his parents, who led the democracy movement that saw Marcos flee into U.S. exile in 1986.

Aquino, 56, is still relatively popular but the constitution limits him to a single term.

His preferred successor is U.S.-educated investment banker Mar Roxas, a trusted ally with many years governing experience who is vowing to continue the pair's "straight path" agenda of steady reforms and fighting graft.

But Roxas, 58, is trailing in polls and analysts say he has a huge task to ignite an electorate that generally perceives him as having little charisma.

"He is dry, he can't connect to ordinary people," Parreno said.

In contrast is Jejomar Binay, 73, a natural campaigner who grew up in poverty but rose to become one of the nation's most powerful politicians.

Binay heads the main opposition party and is the current vice president -- the nation's two top posts are elected separately in the Philippines -- but he has had to endure a barrage of corruption allegations.

A Senate committee recently recommended Binay be charged with graft for kickbacks allegedly taken during his long stint as mayor of the nation's financial capital, Makati.

Binay denies the allegations, insisting they are part of a smear campaign by his opponents and that his family's new riches have been earned legitimately.

Meanwhile, he has sought via slick TV and Internet video clips to portray himself as the man of the poor.

Another top contender for the presidency is Grace Poe, 47, the adopted daughter of a dead movie star whose success so far can largely be attributed to her father's enduring popularity.

However the Supreme Court could knock her out of the race before the May 9 elections, with justices currently listening to arguments she is ineligible based on citizenship and residency laws.

The constitution requires presidents have Filipino parents. But Poe does not know who her biological parents are. Complicating matters, she lived in the United States for many years and took U.S. citizenship before renouncing it.

Binay and Poe have over recent months swapped top spot in popularity surveys. The latest poll, released on Saturday, showed Poe edging back ahead by a small margin.

The wildcard contender is Rodrigo Duterte, 70, a controversial figure nicknamed "The Punisher" for his ruthless but successful tactics fighting crime as mayor of Davao, a major southern city.

Duterte has denied leading death squads but gave a speech late last year in which he bragged about killing drug traffickers.

His vows to clean up crime and end corruption in the nation of 100 million people have won him many fans, both rich and poor.

Meanwhile, Ferdinand Marcos Jnr, the son of the dead dictator, has a strong chance to become the Philippines' next vice president, currently in second place in polling.

His father and mother, Imelda, are accused of plundering billions of dollars from state coffers and overseeing widespread human rights abuses.

Marcos Jnr, a senator, says he has nothing to apologize for and is counting on voters -- many of whom were born after the 1986 "People Power" revolution -- to cement a remarkable political comeback for the family.