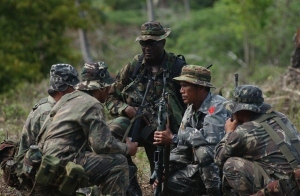 The head of the Philippines' main Muslim rebel group on Thursday urged his followers to maintain a ceasefire with the government despite failure to pass a bill implementing a peace accord.

"Our military forces will at all times maintain its defensive posture," he added.

Philippine President Benigno Aquino, whose six-year term ends in June, had lobbied hard for the passage of the bill, which would have granted the nation's Muslim minority an autonomous southern homeland.

But he was unable to muster enough support in the lower house of Congress to secure a vote before the legislature adjourned this month ahead of national elections in May.

Four decades of fighting in the south have left 100,000 people killed according to official estimates.