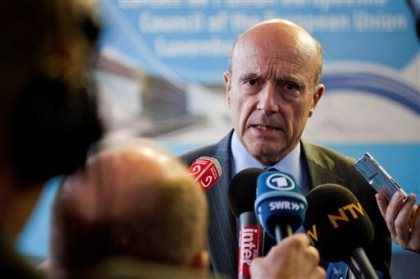 The French foreign minister warned Monday that taking military action against Iran over its nuclear program would drag the world into an "uncontrollable spiral."

Alain Juppe said after talks with European Union counterparts that the EU would reinforce sanctions against Tehran by asking the European Investment Bank to freeze loans to the Islamic republic.

"It is clear that the IAEA (U.N. nuclear watchdog) report shows that Iran is making progress in its project to build a nuclear weapon. It is a major danger for the stability of the region and the world," Juppe said.

But, he warned, "a military intervention would be the worst thing and it would drag us into an uncontrollable spiral."

Given that Iran is showing "zero" interest in negotiating, Juppe said: "We will reinforce our sanctions. We will ask the EIB to stop investing in Iran. That is the weapon we can use today -- and that we will use with determination."

Also on Monday, European Union foreign ministers threatened to tighten sanctions on Iran but shied away from wielding the threat of military action.

German Foreign Minister Guido Westerwelle said too that military action would be "counter-productive."

Only British Foreign Secretary William Hague said all options should remain on the table.

Asked to comment on talk of a strike against Iran, Hague said: "We are not considering that at the moment. We are not calling for or advocating military action.

"At the same time we say all options should remain on the table."

In a statement, the 27 EU ministers voiced "increasing concerns" over Tehran's program and the lack of progress on the diplomatic front.

"We urge Iran to address the international concerns over the nature of its nuclear program through full cooperation with the IAEA and by demonstrating readiness to engage seriously in concrete discussions on confidence-building steps," the ministers said.

Warning that Iran was in breach of international obligations, the ministers said that they would "examine possible new and reinforced measures" when they are next due to meet next month.

"I don't think any military response is justified or called for. We have to solve this by diplomatic means," Bildt said.

Ashton told reporters she was still waiting for a response from Iran on her letter offering to resume talks, but that negotiations had to take place "absolutely in the spirit we proposed."