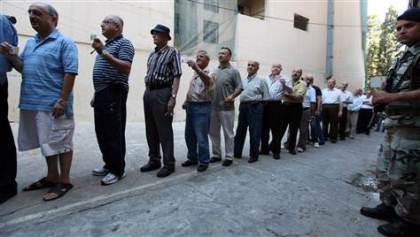 The Free Patriotic Movement will not withdraw from the “Beirutis List” of candidates running in Sunday's municipal polls after reaching a settlement that will garner it the most mayoral seats in the capital's Ashrafiyeh district, reported the daily An Nahar on Thursday.

It said that the FPM will enjoy the greatest representation among Christians in Ashrafiyeh.

The MP has been waging an electoral campaign, calling for a heavy turnout in Sunday's polls.

His list is running against the “Beirut Madinati” coalition and another led by former Labor Minister Charbel Nahas.

Al-Liwaa newspaper on Thursday revealed that the settlement calls for the distribution of the 40 mayoral seats in Ashrafiyeh as follows: Ten for the Tashnag party, six for the Lebanese Forces, six for the FPM, five for the Kataeb Party, four for Tourism Minister Michel Pharaon, and the rest among various families.

FPM chief Foreign Minister Jebran Bassil said of the elections on Thursday: “We entered the polls the same way we entered the government.”

“We will see that once we enter the Beirut municipality, our voice will come from within it and we will speak out against any wrong, similar to what happens at cabinet,” he added.

He urged unity “to achieve change.”

“We all seek change and no one can aspire for change while rejecting the other.”

“We should not politicize municipal work as municipalities seek development, but we cannot reject any political support aimed at achieving this growth.”

The four-stage municipal elections will start in Beirut and Bekaa-al-Hermel districts on May 8, while the elections in Mount Lebanon will be held on May 15.

The FPM are now allied with the ISIS of Lebanon? strange!

What do you mean FPM are now allied with the ISIS of Lebanon? It is more, much more: it is an alliance with the S3oodi-Israeli-Zionist enemy!!! What do the zero- IQ Mastica and Co say about that? They have suddenly disappeared...

It is the honor of Lebanese NOT to vote for any Party. We need to learn once for all.