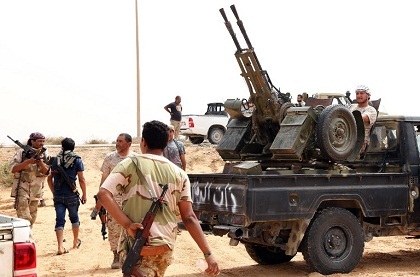 Libya pro-government forces backed by U.S. air strikes said Sunday they would soon launch a final assault to retake the coastal city of Sirte from the Islamic State jihadist group.

"The countdown of the final stage of the military operations against Daesh has started," forces loyal to the Tripoli-based national unity government said in a statement, using an Arabic acronym for IS.

"The operation's leaders held intensive meetings to prepare for the final and decisive battles to eradicate the Daesh gang from the city of Sirte", they said in a statement.

A Sunday post on the operation's Facebook page showed a photo of men in uniform examining a map of the city, which the jihadist group seized in June 2015.

Fighters allied to the U.N.-backed Government of National Accord (GNA) have waged a fierce weeks-long battle to retake the city some 450 kilometers (280 miles) east of Tripoli.

Pro-GNA forces launched the campaign in May and entered the city in June, but their progress slowed down as the jihadists hit back with sniper fire, suicide attacks and car bombings.

Since Thursday pro-government forces have sought to reach IS headquarters at the Ouagadougou conference center inside the town.

The United States have since Monday been carrying out air raids on IS positions in Sirte at the GNA's request.

Six U.S. air strikes on Saturday targeted an IS position, killing a sniper and destroying a vehicle, pro-GNA forces said.

More than 300 people have been killed and 1,800 wounded in the operation for Sirte, according to medical sources in the city of Misrata, where the operation's command center in based.

IS took advantage of the chaos that followed the 2011 toppling of longtime strongman Moammar Gadhafi to gain a foothold in the oil-rich North African country.